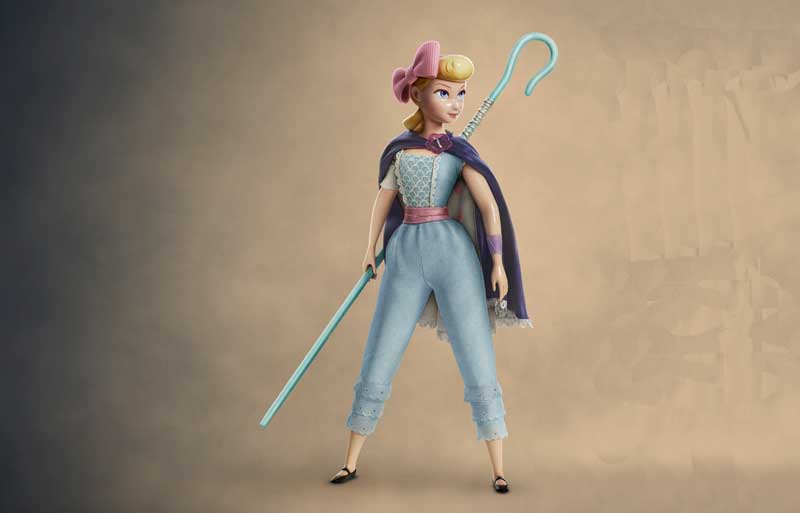 A big week for Toy Story 4 news. We got our first look at the new outfit for Bo Peep, learned a bit more about two of the franchise’s newest characters, and witnessed two stars say a fond farewell to their time working on the film.

Apparently, one of the main plots of the story is Woody’s quest to reunite with Bo Peep, who they think got left behind at Andy’s house. Bo Peep, meanwhile has gone through a bit of a wardrobe change.

“Bo’s taken control of her own destiny,” said “Toy Story 4” director Josh Cooley. “While Woody was watching Andy grow up, Bo gathered dust until she took it upon herself to head out into the world. And when Woody shows up, they can’t believe that they’ve found each other again.”

Annie Potts returns as the voice of Bo Peep. “She is modern, independent, capable and confident,” said Potts of her character. “Bo is written and conceived to be inspiring as she has weathered life’s ups and downs with grace. I aspire to that.”

Ducky and Bunny are two new characters in Toy Story 4 and it looks like they’ve found someone’s lost phone and figured out how to use Twitter.

WE’RE ON THE GIF BUTTON ??? pic.twitter.com/RTp1ktBvBh

Tom Hanks posted a photo of his final session recording as Woody in Toy Story. “We rode like the wind, to infinity and beyond,” said Hanks:

Final line, final session as Woody of Toy Story 4. We rode like the wind, to infinity and beyond. Hanx pic.twitter.com/v87ZYNyzx8

Sounds like an emotional week for everyone. Theaters might want to consider selling tissues at the concession counter.

Now the countdown is on for Toy Story 4 to premiere and open in theaters everywhere. Can’t wait that long? A special sneak peek of Toy Story 4 will air after the Super Bowl this Sunday.

About the Toy Story 4:

Woody has always been confident about his place in the world, and that his priority is taking care of his kid, whether that’s Andy or Bonnie. So when Bonnie’s beloved new craft-project-turned-toy, Forky, declares himself as “trash” and not a toy, Woody takes it upon himself to show Forky why he should embrace being a toy. But when Bonnie takes the whole gang on her family’s road trip excursion, Woody ends up on an unexpected detour that includes a reunion with his long-lost friend Bo Peep. After years of being on her own, Bo’s adventurous spirit and life on the road belie her delicate porcelain exterior. As Woody and Bo realize they’re worlds apart when it comes to life as a toy, they soon come to find that’s the least of their worries.

previousFinally an answer to why Jay Leno is thanked in Mary Poppins Returns credits
nextGo behind the scenes of Star Wars: Galaxy’s Edge with Imagineer