Ever After meets Joan of Arc. Mirror, Mirror: A Twisted Tale is a fresh, valuable take on Disney’s classic Snow White and the Seven Dwarfs. Author Jen Calonita teams up with Disney Press to pay homage to the original Snow White story while embarking on a confronting new adventure all its own. 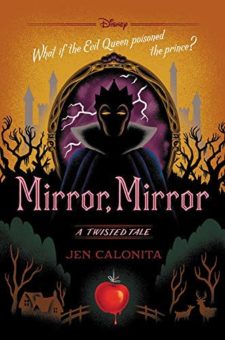 Calonita draws her readers in by giving most of her characters names, in addition to their renowned titles or descriptions – you simply want to know more. For example, the Evil Queen was once simply “Ingrid”. Readers explore Ingrid’s past — her hardships, sacrifices and views of the world — before arriving at her infamous station as the Evil Queen. Ingrid’s relationships are also maturely mapped out so readers can (almost) comprehend her quest for influence and power.

The “extended scenes” or added character dialogue in the book brings the classic fairytale into the 21st century. Passages like “[Snow] cleared her throat, voicing her anger at the injustices she learned about” and “the only one who could truly break her free was herself” provide renewed life lessons to readers. Young and old have something to learn from Calonita’s Snow White. The princess does everything from negotiating trade agreements, to rescuing her prince, to rallying an army. Of course, she is also beautiful and kind (which, along with the characters’ mostly true-to-the-film garb, should satisfy the Disney princess purists). Specific applause goes to Calonita’s inversion of traditional character roles. It is a delight to see Prince Henri as Snow’s friend, not her savior.

Themes of Disney’s classic are creatively intertwined with Calonita’s tale which, along with its modern twist, should earn it five stars. However, the lucky last star is missing from this review because the back-and-forth timeline in the early chapters stunted early development of the story and made it feel disjointed. It should be hard to put a good book down, but the constant time travel in the beginning made it easy to do so. This structure did not jive with my reading flow, but should not deter you from picking up this book. Who doesn’t want to read an origin story of one of Disney’s most famous villains alongside a progressive, independent Snow White? Do yourself a favor – grab a copy.

Mirror, Mirror: A Twisted Tale is available now for pre-order on Amazon. It will be released on April 2, 2019. Your purchase on Amazon will help support The Disney Blog. Thank you.