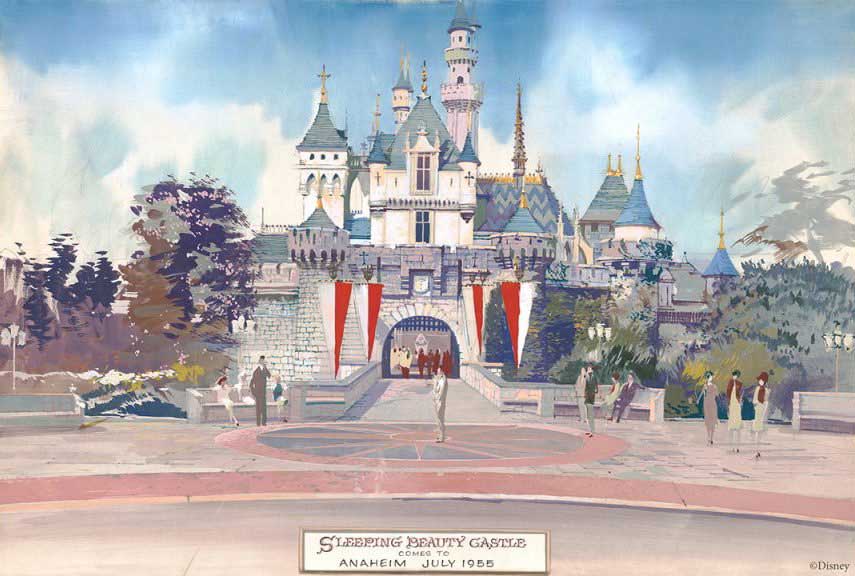 Project Stardust is code word for a huge refurbishment project underway at Disneyland. The word combines Star, from Star Wars: Galaxy’s Edge, the opening of which is expected to draw record crowds to the park, and Dust, from Pixie Dust, which is getting sprinkled around liberally to make the park beautiful and able to handle those crowds.

The biggest evidence of the improvements is work going on at Sleeping Beauty Castle at the center of the park. The castle has been updated over the years with little touches and from time to time gets a different seasonal treatment. The current refurbishment will add a few extra doses of pixie dust, as well as repair some of the features that have seen excessive wear and tear over the years.

We love that original concept art (above) from Disney Legend and Imagineer Herbert Ryman. While the design of the castle has evolved over the years, those pinks and blues have been there from the very beginning.

Other projects around the park include doing things like relocating planters and outdoor vending carts to add additional walking space and new, more efficient stroller areas. Seating is being relocated from the sides of pathways to more off the beaten path areas. Disney promises there will still be plenty of places to sit down and take a load off when project StarDust is complete.

On Main Street U.S.A. curbs are being rethought to have lower inclines to make traffic move faster when entering the park. New brickwork will add to the storytelling in the area. Disneyland will also be replacing the horse-drawn streetcar track in its entirety. That’s the first time that has ever happened. The track really takes a beating from the parade floats, ya know.

A few big attractions are getting enhancements. The Matterhorn Bobsleds is getting a reconfigured queue area. It’s a small world and Dumbo the Flying Elephant will also have new guest access.

You’ve also heard about Tropical Hideaway in Adventureland. In addition to a small menu of refreshments, you can pick up a Dole Whip there. This will allow Disneyland to close the counter outside the Tiki Room during busy days to keep traffic in and out of Adventureland movie.

All in all Disneyland looks great for 63 years of enchantment, but it’s clear project StarDust is needed with Star Wars: Galaxy’s Edge opening in just a few months. Let us know what other pixie dust you’d like to see happen at Disneyland?