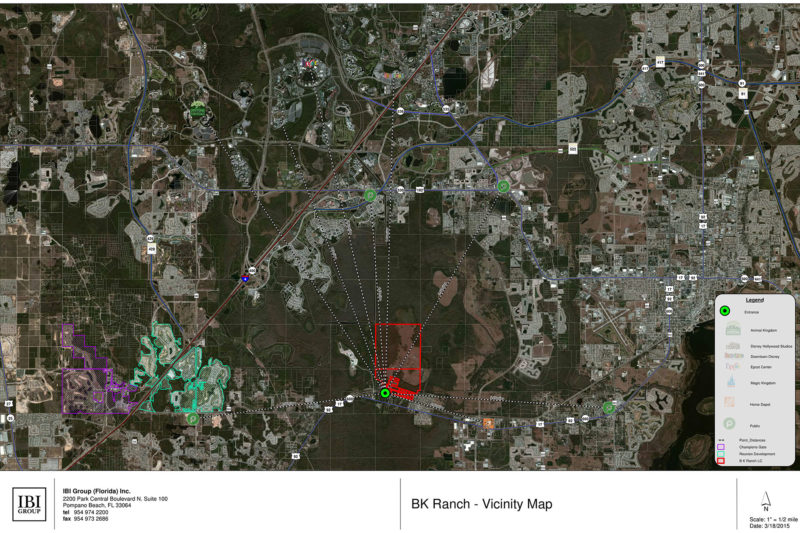 Celebration in Osceola County, FL is known as the town Disney built. Although the Walt Disney Company no longer owns or manages the development, it does maintain some business offices in the town. In a move that has fans talking,Walt Disney World acquired an additional 1,000 acres of land nearby Celebration, FL earlier this month. But what could Disney do with that property?

The parcel, known as BK Ranch, is zoned for development, but currently sits almost entirely undeveloped. It’s close to Poinciana Blvd and the SunRail commuter rail station, but there’s no direct road connecting it with either Celebration or Walt Disney World. It’s also similar in size to the original city limits for Celebration.

To add to the intrigue, in the past decade or so, a plot of land just north of the property had been the target of two companies who wanted to build an entirely new amusement park and resort off the 192 highway. Those properties never materialized due to the price the owner of that land wanted for it and due to the massive conservation areas on the parcel that would limit commercial development.

That gives us our first big hint as to what Walt Disney World may want with this property. A few years ago, Walt Disney World made a deal with the state of Florida that it could develop property inside the Reedy Creek Water District currently designated as conservation, as long as it converted an area elsewhere currently designated for commercial construction into conservation. They’ve already done this with a couple parcels allowing them to expand Disney’s Hollywood Studios and do some water management around Epcot.

I think that’s the most-likely scenario. And a Walt Disney World spokesperson confirmed that the land was purchased for “conservation-related and water management needs.”

If Walt Disney World wants to build another major development on property, it can now convert some of its remaining conservation land into areas approved for development and keep this currently undeveloped land in Osceola County preserved for future generations.

As to what Walt Disney World plans to build? With Universal Orlando Resort building a third theme park and adding 1,000s of hotel rooms, Disney likely wants to do more to keep its guests on property. I don’t see a fifth gate opening anytime soon, but I could see a second Boardwalk like development giving a third choice for nighttime dining and entertainment on property, along with more resorts and activities.

Disney might also have an eye on expanding ESPN Wide World of Sports Complex or adding a stop for the Brightline / Virgin USA high speed railroad that will run right by that portion of Walt Disney World.

It may seem boring, but I suspect it’s very likely that Disney World mostly wants to move some of its existing support structures and offices away from its theme parks. (For instance, the HR team for all Walt Disney World resort hotels is housed backstage at Disney’s Hollywood Studios.) Moving these facilities elsewhere on property would allow Disney to continue to add to its existing theme parks without expanding their borders.

Of course, for the price, just $23 million, it may be that Disney is just doing some real estate investment and will keep this property in its back pocked in an attempt to flip it later for a profit.

50+ years ago when Walt Disney World sprang into existence, the company was able to purchase 30,000 acres to build Walt’s final dream. 50 years later, it turns out that may not have been enough. I wonder if Disney is regretting the moves of previous management which sold off some adjacent properties a decade ago.

If you were in charge of the next 10 years of development at Walt Disney World Resort, what would you build? New resorts, new attractions, new shopping and entertainment or even a whole new theme park? Let us know in the comments.