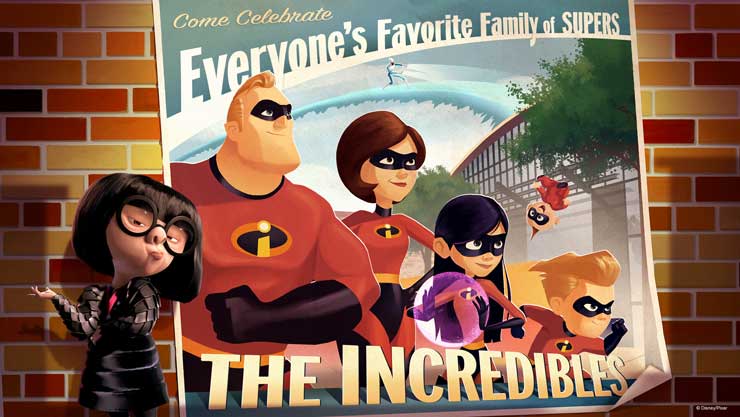 2019 is going to be a momentous year for Disney’s Hollywood Studios. We talked the other day about all the new attractions coming to the park, including Star Wars: Galaxy’s Edge, today we learn more about some of the new entertainment options coming to Disney’s studios park.

Beginning Jan. 18, 2019 the former Pixar Place will transform into a Municiberg city block from Pixar’s Incredibles films. Guests will meet super suit designer Edna Mode and see some of her greatest creations. They will look for clues to the whereabouts of the youngest Incredible, the mischievous and multi-powered Jack-Jack. And at the end of the block, guests will celebrate the heroic deeds of Mr. Incredible, Mrs. Incredible and Frozone, who will make appearances throughout the day during a party featuring lively music, dancing, interactive games and lots more Super fun.

Yes, this new entertainment is replacing some dear departing entertainment, including cutbacks in the Citizens of Hollywood, but it’s good for Disney to strike at the Incredibles fire while it’s hot.

Disney’s Hollywood Studios prepares to celebrate its 30th anniversary May 1 and while its name may be remaining the same, the park is transforming into a place where guests experience their own adventures in the immersive worlds of their cinematic imaginations. With the addition of the Star Wars themed land and attractions, attendance will likely double. Disney’s Hollywood Studios is going to need a lot of options to entertain guests who can’t make it into the land due to crowds.

This new entertainment is likely temporary in nature as the park evolves its entertainment mix to work with the new theme and recent expansions. Will you be paying a visit to your favorite Pixar Pals on your next visit to Disney’s Hollywood Studios?