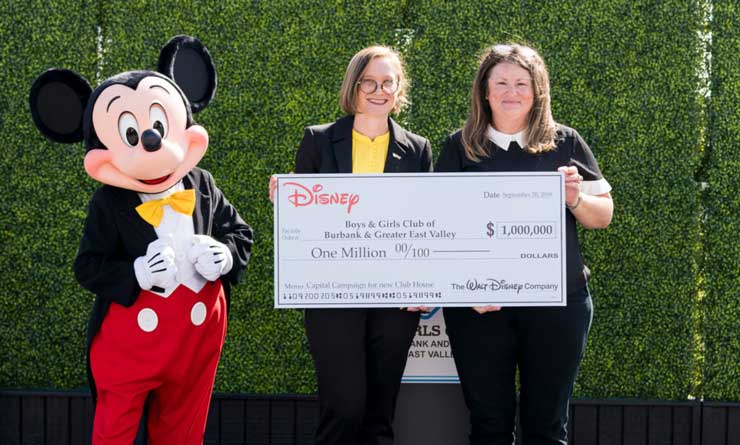 Beyond locating its headquarters there since 1940, The Walt Disney Company has deep ties to Burbank and surrounding cities. In 1995, the Boys & Girls Club of Burbank and Greater East Valley began in an old firehouse just up the road from The Walt Disney Studios in Burbank, California; and now, more than two decades later, the Club serves thousands of young people every year in six different Southern California cities, including Burbank, North Hollywood, North Hills, Van Nuys, Sun Valley and Hollywood. This week the Club announced that The Walt Disney Company is making a $1 million dollar investment in the organization through a donation that will provide the funds needed to build a new Main Club facility and give 400 Boys & Girls Club members a safe place to go after school.

The brand-new facility, which is expected to be completed by fall of 2020, will be a two-story, 16,000-square-foot space with two multi-purpose rooms, a games room, creative arts space, STEM lab, teen club, two learning centers, teaching kitchen, conference room and garden/roof patio.

“The Walt Disney Company is pleased to make this contribution and fund the construction of a new main club facility,” said Margolis, senior vice president, Enterprise Social Responsibility for The Walt Disney Company. “The impact of this new club will more than double the number of members served by The Boys & Girls Club and provides a safe place that meets the diverse needs of our local youth.”

The Boys & Girls Club of Burbank and Greater East Valley’s mission is to help every child reach their full potential, focusing on academic success, healthy lifestyles, character and leadership through a variety of programs—including the only Deaf and Hard of Hearing program in the area. The Club will share the new facility with Burbank Unified School District, and the project has been a joint effort between the two organizations.

“For the last 10 years, we have been on a journey to acquire a new main club facility that meets our ever expanding needs,” said Warren. “Because of The Walt Disney Company’s confidence in the Club and financial support, we have just taken a major step forward in making our dream come true.”

Many of Disney’s employees live in the Burbank area and many Disney divisions have offices throughout the region. They often reach out to local non-profits that are engaged in helping keep those communities strong. A new building for the Boys & Girls Club will make a big difference. This is another step on a path forward for the whole region. Kudos to The Walt Disney Company for taking it.