Get ready gamers? Disney’s back with a sequel to the very popular Wreck-it Ralph movie in “Ralph Breaks the Internet.” Disney has reunited the original director (Rich Moore), producer (Clark Spencer), and co-writer (Phil Johnson) for the sequel.

Video-game bad guy Ralph (voice of John C. Reilly) and best friend Vanellope (voice of Sarah Silverman) leave the comforts of Litwak’s arcade in an attempt to save her game. Their quest takes them to the vast world of the internet, a world Vanellope wholeheartedly embraces—so much so that Ralph worries he may lose the only friend he’s ever had.

Yes, Wreck-it Ralph is back and this time the whole internet is in danger. Watch the new wide screen trailer here:

Disney also released a few new photos and a new poster. There are a lot of characters, including some iconic Disney ones in the movie. How many do you recognize? 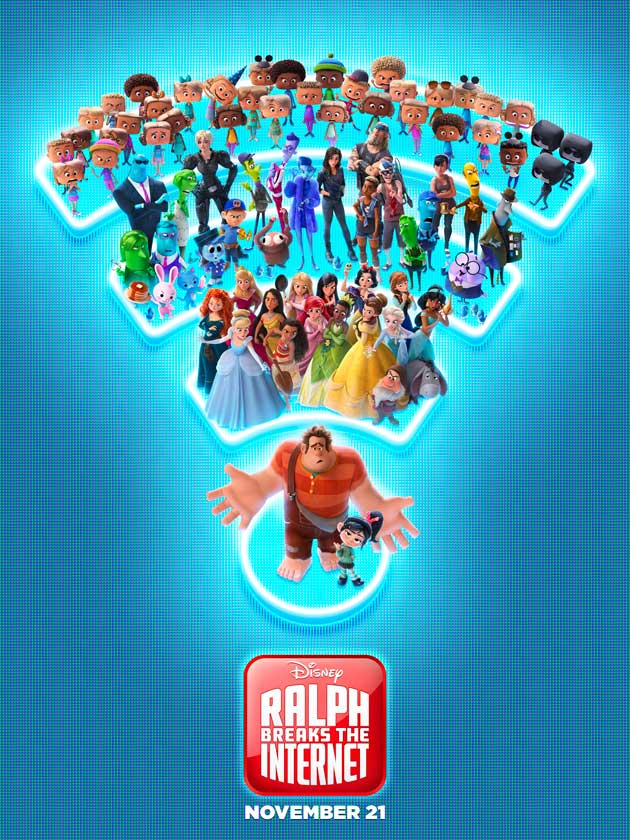 The Race is On

When video-game bad guy Ralph and Vanellope head to the internet in search of a replacement part for her game, Sugar Rush, they find themselves in the middle of Slaughter Race, an online racing game set in an apocalyptic world that’s populated by first-person players and gaming characters. As a racer herself, Vanellope is immediately drawn to this fierce and fun crew of racers who, unlike in other racing games, are much more multidimensional than at first glance. Among the core team of game characters in Slaughter Race are Felony (voice of Ali Wong), Butcher Boy (voice of Timothy Simons), Shank (voice of Gal Gadot), Little Debbie (voice of Glozell Green) and Pyro (voice of Hamish Blake).

In “Ralph Breaks the Internet,” Vanellope befriends a tough and talented driver in an intense online racing game, leaving Ralph feeling left out, confused and willing to do anything to preserve his friendship with Vanellope. But even with the best intentions, Ralph’s efforts don’t always go as planned—particularly when he enlists the help of Double Dan, the proprietor of the dark web’s apothecary. Massive, slimy and decidedly creepy with a second head called Little Dan tucked into his neck folds, Double Dan formulates destructive viruses.

When “Wreck-It Ralph” opened on Nov. 2, 2012, it turned in the highest opening weekend ever for a Walt Disney Animation Studios film at the time of release. There are high expectations for this sequel.

In “Ralph Breaks the Internet,” video-game bad guy Ralph (voice of John C. Reilly) and best friend Vanellope von Schweetz (voice of Sarah Silverman) leave the comforts of Litwak’s arcade in an attempt to save her game, Sugar Rush. Their quest takes them to the vast, uncharted world of the internet where they rely on the citizens of the internet—the Netizens—to help navigate their way. Lending a virtual hand are Yesss (voice of Taraji P. Henson), the head algorithm and the heart and soul of the trend-making site “BuzzzTube,” and Shank (voice of Gal Gadot), a tough-as-nails driver from a gritty online auto-racing game called Slaughter Race, a place Vanellope wholeheartedly embraces—so much so that Ralph worries he may lose the only friend he’s ever had.