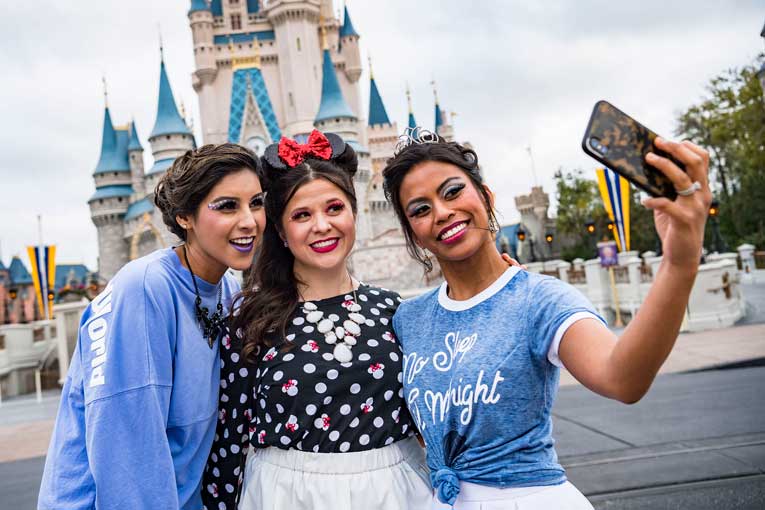 It’s been a trend ever since the idea of DisneyBounding took off. Disney fans of all ages were going to the parks dressed with Disney character inspired outfits and often with character-inspired makeup to boot. As the trend grew, the salons at Walt Disney World found themselves taking requests for more elaborate character makeovers from guests who wanted that special Disney look for a day in the park or perhaps even a big event, like a wedding. New ‘Character Couture’ makeover packages make this a permanent offering on Disney’s salon menu.

From Ursula and Ariel to Cinderella and Maleficent, you can now indulging in an array of custom character-inspired makeovers at salons across Walt Disney World Resort. Disney’s new Character Couture packages offer sophisticated hairstyles, as well as detailed makeup and nail designs inspired by Disney characters.

We were given an look at what your Disney Character Couture Makeover may look like as this model was being transformed into Ariel.

“This is all about creating a stylish, new way for guests to have fun and be creative,” said Joseph Motowidlak, guest experience manager at Walt Disney World Spas. “Our makeover experts consult with guests to create a character-inspired look that captures their personality and Disney style. It’s a salon experience only Disney could create.”

Makeovers are available for guests ages four and up. And with a little pixie dust, style options are limitless at a Disney salon. An out-of-this-world galactic transformation inspired by Star Wars characters, a regal style befitting a Disney Princess, or a spooky-yet-glamorous look inspired by a Disney Villain are just a few of the possibilities.

Whatever look you choose, you get to step into the stories of your favorite characters with these transformative makeovers. That starts with choosing from three makeover options. Storybook Style features a character-inspired hairstyle, including fancy up-do. Magical Makeover compliments the hairstyle with intricate makeup. Rounding out the options, the Timeless Transformation includes hairstyle, makeup and nails.

Experiencing a Character Couture makeover can be a fun day out for best friends, a great way to get dolled up before a birthday or anniversary celebration, or a unique way to express a guest’s individual style while on vacation.