What happens when you the class clown becomes a mega-star in Hollywood? You get a gag reel full of laughs. The hilarious outtakes from Marvel Studios’ “Avengers: Infinity War” are great, but they’re just one of the reasons to pick up the Blu-Ray DVD pack, now available on ShopDisney (with free lithograph) or Amazon, for your collection.

Featurettes provide behind-the-scenes access to memorable moments when characters first meet, the rationale behind some unexpected on-screen pair-ups, explores the frighteningly powerful Thanos, the struggle on Titan and the massive battle in Wakanda. Deleted scenes and filmmaker commentary reveal even more on-set secrets from Marvel Studios’ monumental undertaking. And the gag real showcases a lighthearted collection of on-set antics from all your favorite Super Heroes. 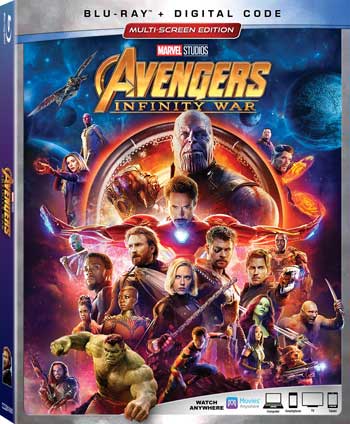 This must-own addition to the in-home film collection is packaged in several ways so that fans can get the most out of their viewing experience including a 4K Cinematic Universe Edition (4K Ultra HD+Blu-ray+Digital) and as a Multi-Screen Edition (Blu-ray+Digital). And for those who wish to catch up on their MCU history, select retailers are also offering bundled packaging of “Avengers: Infinity War” to include “Marvel’s The Avengers” and “Avengers: Age of Ultron.”

BONUS MATERIAL (may vary by retailer):