It was Tyler family time at Disneyland Paris this last weekend. Aerosmith lead singer Steven Tyler and his daughter, actress Liv Tyler, dropped in on Mickey and his pals in Disney’s Europe focused park. Celebrities love Disney too, right?

The pair were spotted on Le Carrousel de Lancelot and visiting with Mickey Mouse. Liv joined her husband and children for a visit to Sleeping Beauty Castle and “it’s a small world.” They also squeezed in a visit with Tigger and Goofy. 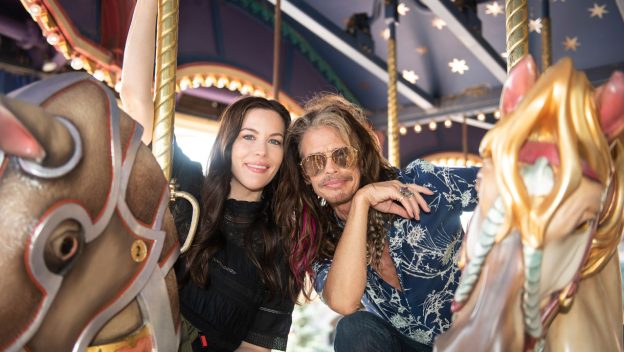 Of course, no trip to Disneyland Paris with the Tyler’s is complete without a joy ride on Rock ‘n’ Roller Coaster starring Aerosmith, Steven’s old band. Liv gets equal play at the park with Armageddon: les effets speciaux, based on the 1998 film Armageddon, which Liv starred in. Of course they visited:

No one tell Steven, but the Aerosmith name won’t be around much longer at Disneyland Paris’ smaller studios park. As part of a big expansion, a new Marvel based land will transform Rock ‘n’ Roller Coaster starring Aerosmith into a Marvel themed attraction featuring Iron Man and your favorite Avengers.

previous“The Nutcracker and The Four Realms” – new trailer reveals magical world
nextIs Disney ready to give The Muppets another try?