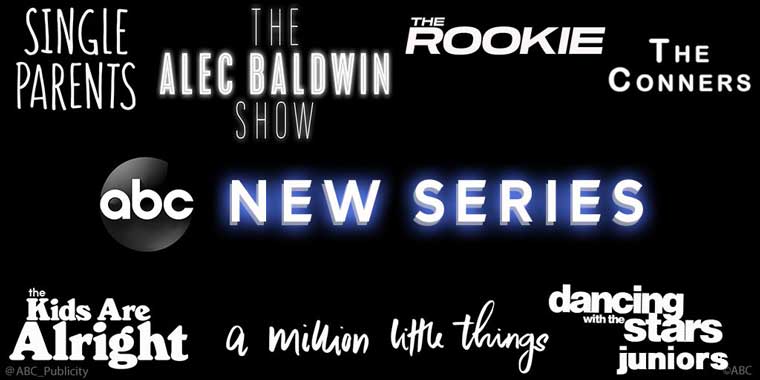 Mark your calendars, the fall season premiere dates for ABC’s 2018-2019 season have been announced. The fun kicks off September 24th as seven shows join returning favorites. New series include ‘The Alec Baldwin Show,’ ‘The Conners,’ ‘Single Parents,’ ‘The Kids Are Alright,’ ‘A Million Little Things,’ ‘The Rookie’ and ‘Dancing with the Stars: Juniors,’ which debuts first.

This fall’s new dramas “A Million Little Things,” which is about a group of friends coping with an unexpected loss, premieres Wednesday, Sept. 26; and “The Rookie,” starring Nathan Fillion as one of the newest – and oldest – police trainees in Los Angeles, premieres Tuesday, Oct. 16. That same night, ABC will launch two new comedies – “The Conners,” a spinoff of the groundbreaking show “Roseanne,” and “The Kids Are Alright,” inspired by creator Tim Doyle’s Irish-Catholic upbringing in the turbulent ’70s. “Single Parents,” which is about a group of adults who lean on each other to raise their children while trying to hold on to their personal lives, rounds out the new comedy slate, and premieres Wednesday, Sept. 26.

“Dancing with the Stars: Juniors,” which will pair celebrity kids with professional junior ballroom dancers, launches with a two-hour premiere on Sunday, Oct. 7. Rounding out the roster of new fall titles is “The Alec Baldwin Show,” featuring in-depth conversations with some of today’s most intriguing personalities. Starring the three-time Emmy winner, the hour-long show, which first aired as a sneak preview last March, will premiere Sunday, Oct. 14.

Friday nights herald the return of TGIF on ABC, which first launched the iconic programming block nearly 30 years ago. The new TGIF premieres Oct. 5 and will feature “Fresh Off the Boat” and “Speechless” on their new night, followed by “Child Support” with Ricky Gervais and Fred Savage, at its new time.

ABC’s longest-running prime-time drama series, “Grey’s Anatomy,” kicks off its record-breaking 15th season with a two-hour premiere on Thursday, Sept. 27, followed by the fifth season premiere of “How to Get Away with Murder.” “Station 19” returns to the TGIT lineup the following Thursday, Oct. 4.

Premiere dates are listed below. All times listed are EDT, and new shows are listed in bold.

Which shows, old or new, will you be watching this fall on Disney’s ABC Network?