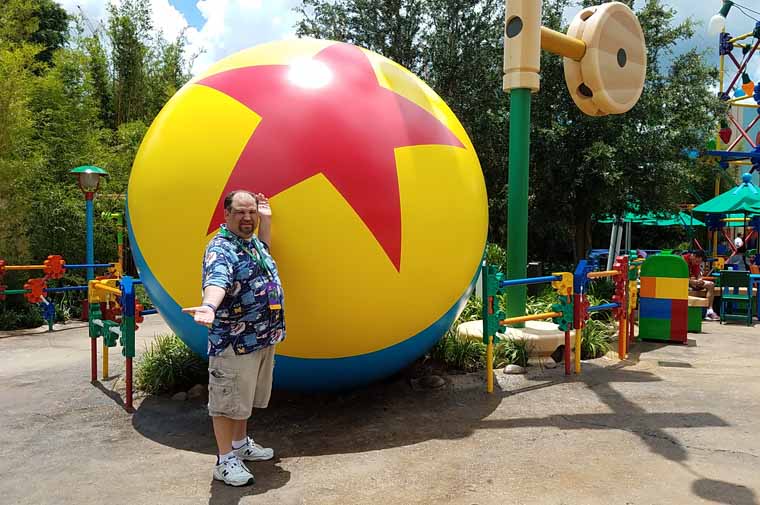 Disney’s team of talented Imagineers partnered with Pixar’s theme park development team to bring the world of Toy Story to life in a fully realized land unique to any before seen at Walt Disney World. Upon entering the world of Andy’s backyard, guests are shrunk down to the size of Green Army Men and encounter all the things that Andy has arranged in the backyard as he plays and tells stories of his own. It’s almost like the Imagineers saw in Andy a young one of their own creative minds.

In Disney’s theme parks, details make the magic. Imagineers tell the story, in this case being toy sized in Andy’s backyard, by immersing guests in a world where every little design choice is important. It really does feel like Andy just dropped his toys and stepped away for a moment and now you get to explore his creation.

There are way too many fun details to list in a single blog post, but I’ve listed a few of my favorites below.

Following the Purple Wall in Tomorrowland and moss wall at Pandora – the world of Avatar, building in that ‘Instagram’ moment has become ‘de rigueur‘ for theme park design.

In its movies the Luxo Ball is often a hidden easter egg you have to be quick to spot, but in Toy Story Land it’s been given a prominent location that is sure to become a popular meeting spot and photo location. People are already lining up for selfies, myself included (at top).

Statues of iconic Toy Story characters loom over toy sized guests and actually talk as you walk by them. They also make great back grounds for selfies and group photos. Imagineers included other great photo opportunities like the little green alien in a flying saucers. 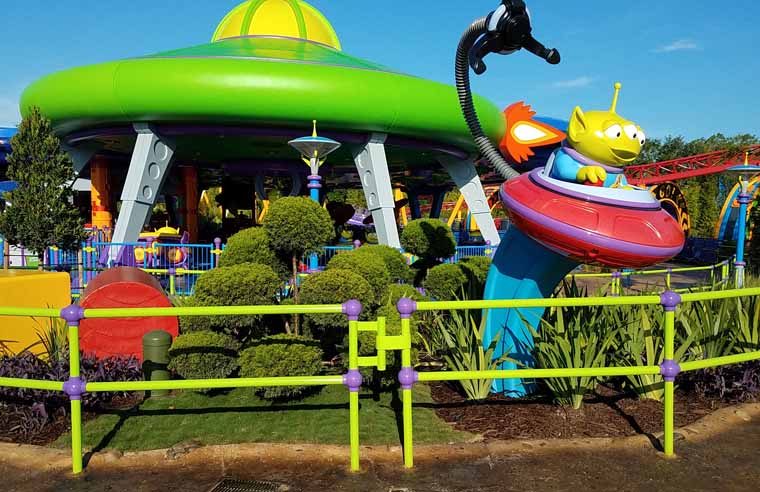 If you look just to the left of the LGM statue, you’ll see the place where two fences are joined. If you look closely, the joints spell the letters O and H… or Oh, the sound the little green aliens make when worshiping The Claw. 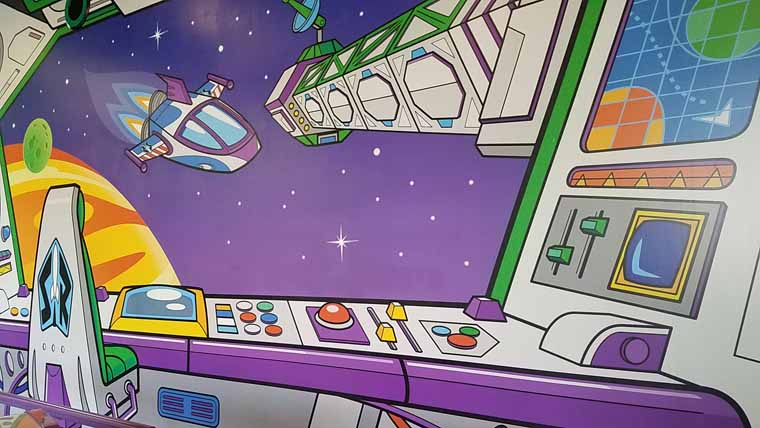 There are a couple of fun Easter Eggs in the queue for Alien Swirling Saucers. Hidden Mickey hunters will way to pay close attention to the Space Ranger mural on the back of the stand by queue. Three of the buttons make a very familiar shape. 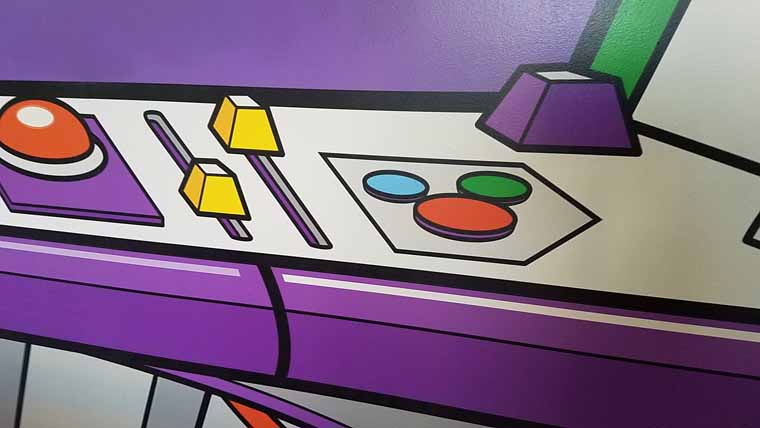 To the right of that mural is another fun call out to a Pixar tradition. The word ‘A113’ appear in every Pixar movie, in the queue you can see the words Bay 1 and Bay 13 right next to each other. Read them out loud and it sounds like Bay 1 13. That’s close enough for us.

The entire queue of Slinky Dog Dash is a loving recreation of some of our favorite childhood toys. From the original box for Slinky Dog to classic childhood games to a box seen online in a Pixar animated short, there’s a lot of great stuff to see. 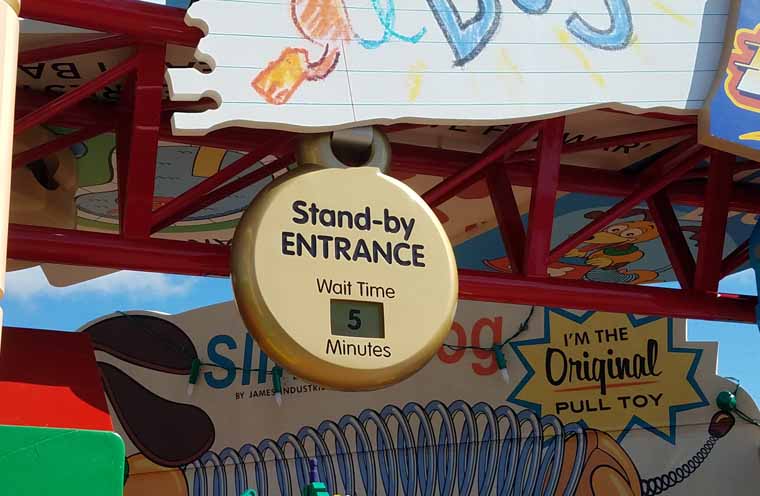 Starting at the entrance to the queue. As you enter look up at the back of the standby queue wait time sign. Turns out it’s Buster the dog’s name tag, complete with the address of Andy’s house on it. 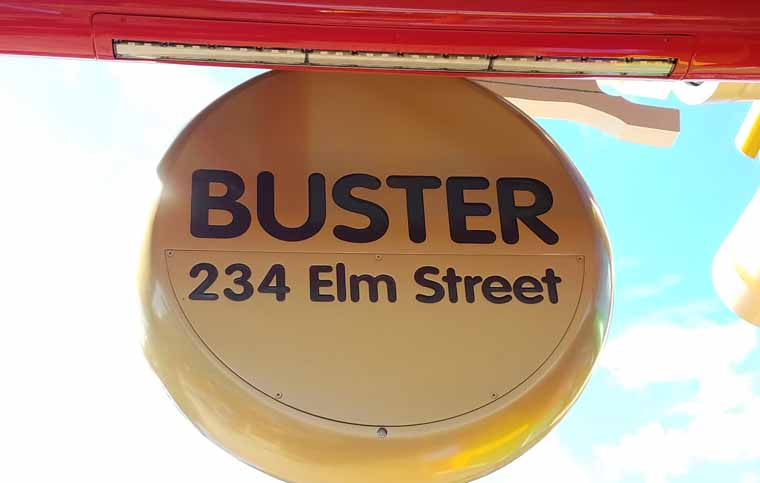 As you board your Slinky Dog car in the station, look at the hand drawn map Andy made of his coaster. It’s full of fun coaster jokes and story elements and in the upper right corner, just above the green army men parachutes, is a hidden mickey in the clouds. At the end of the ride when you pause to listen to Wheezy the penguin sing be sure to look around for some great hidden secrets. 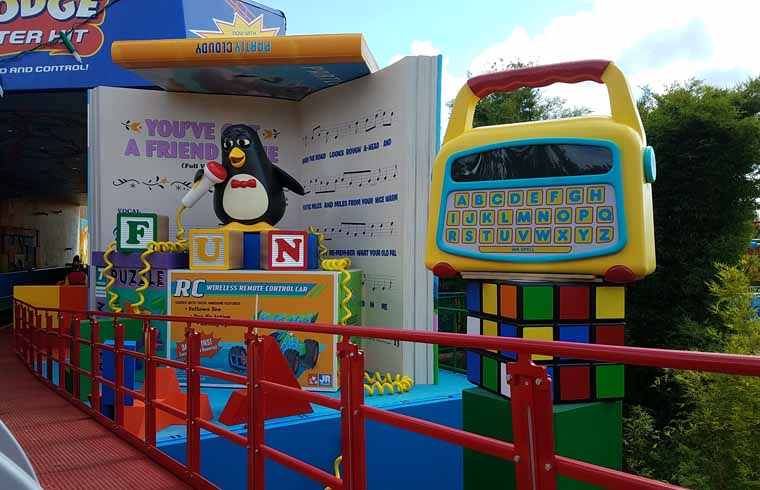 The RC car box Wheezy is standing has the Luxo Jr brand and features the Luxo lamp and ball on it. The book providing some shade above Wheezy is titled “Partly Cloudy,” one of Pixar’s animated shorts. Then look to the upper left where you see a UPC code, just below it reads “Made in Emeryville, CA” which is the home of Pixar Animation Studios. 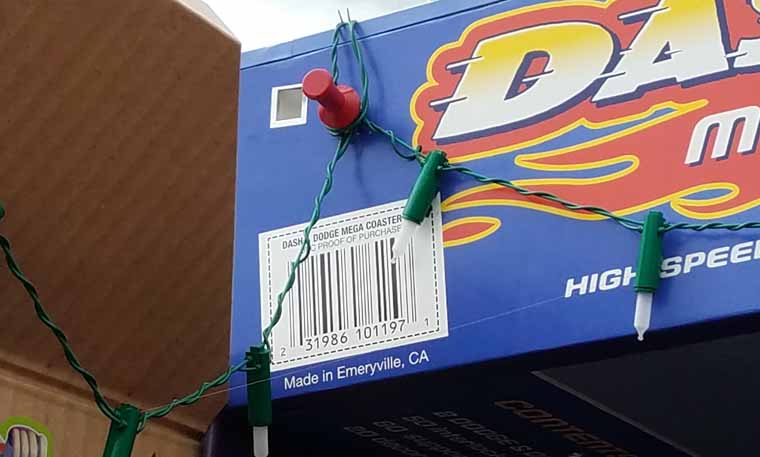 Benches made of popsicles, dominoes, and wooden railway pieces really make you feel toy sized. Wooden blocks are strewn around the yard with rings just like they’re made from real wood add to that verisimilitude. 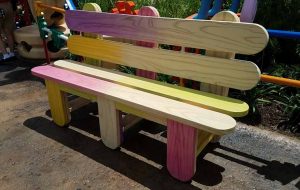 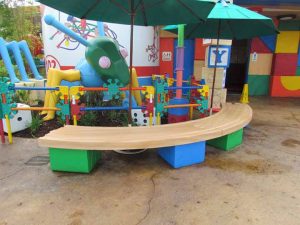 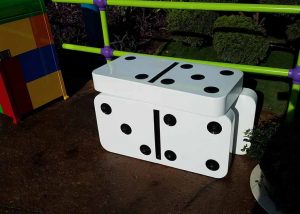 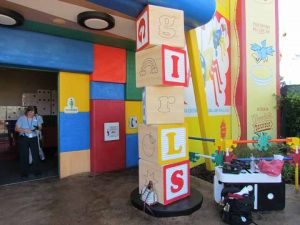 Bathroom signs for Boys and Girls spelled out in alphabet blocks. And the visual joke of cooties crawling around the outside of the restrooms is cute.

The landscaping and lightening features all blend into the theme. Tinkertoys hide speakers and lights, straws become supports for lights and Playmobil vehicles become merchandise locations. 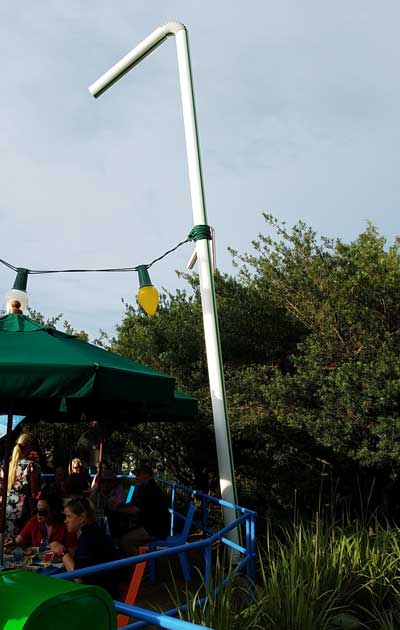 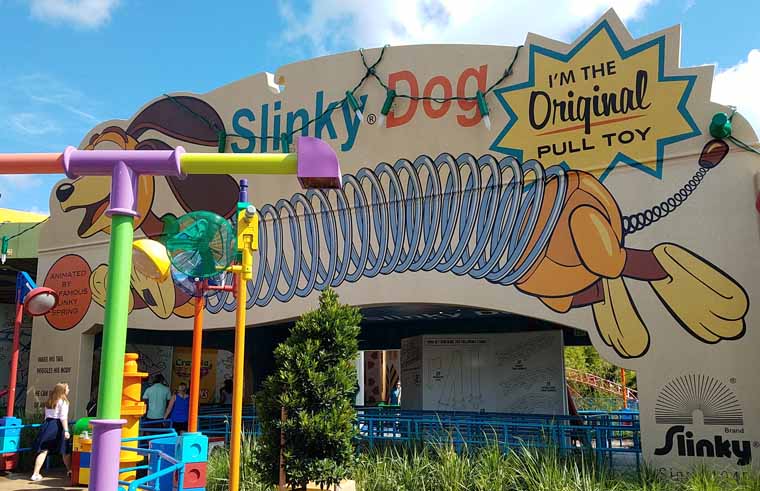 One of my favorite details can be found at Woody’s Lunch Box. There are a few tables with Babybel Cheese Wheels as seats. One of the table tops is a note from Andy’s Mom that he took out of his lunch. Notice the message, “you’re my favorite deputy.” I hope you’re able to find these fun details and hidden secrets and maybe discover a few of your own favorites on your trip to Toy Story Land. Let us know when you plan to go in the comments below.