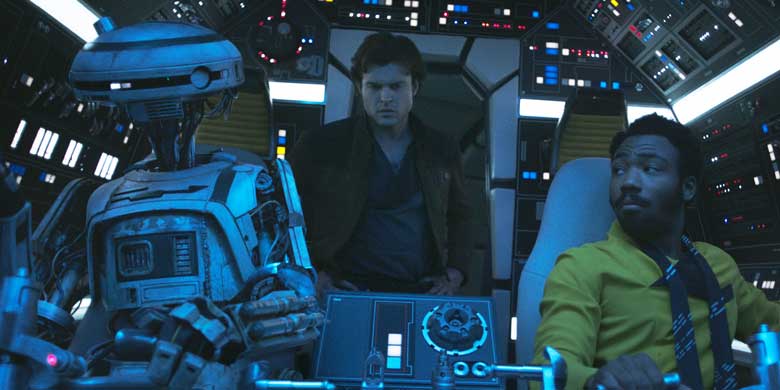 A new TV spot for “Solo: A Star Wars Story” just dropped and it highlights the ‘Risk’ Han, Chewie, and the gang are at in the film. We also enjoyed hearing some new quips from Lando and his self-made droid L3-37 like when he calls Han and Chewie “hairy and the boy.” Among some new scenes, keep an eye out for other characters including Qi’ra, Beckett and the crime lord Dryden Vox.

Wait? Is Solo’s first name pronounced Han as in Can or Hon as in Con? Lando clearly says Han as in Can, but I think everyone else says Hon as in Con. Actually that was true in the earlier movies. It’s neat to hear Donald Glover continuing the tradition of using same pronunciation as Billy Dee Williams.

It’s also fascinating to remember that all those wookiee yells, growls, and grunts are added in post-production. On the set, the actor under the mask actually speaks lines in the script. This gives other performers something to react to making all the performances more real.

Here’s an example of Peter Mayhew as Chewbacca:

“Solo: A Star Wars Story” co-writer Jon Kasdan spoke about it on The Star Wars Show:

“In this script, we wrote every one of Chewie’s lines. We wanted Alden, who plays Han in the movie, to know what was being said to him, so he would know what to play, regardless of what he interpreted from the moan.”

Not everyone knows the wookiee language, but who hasn’t tried their own wookiee roar or laugh, right?