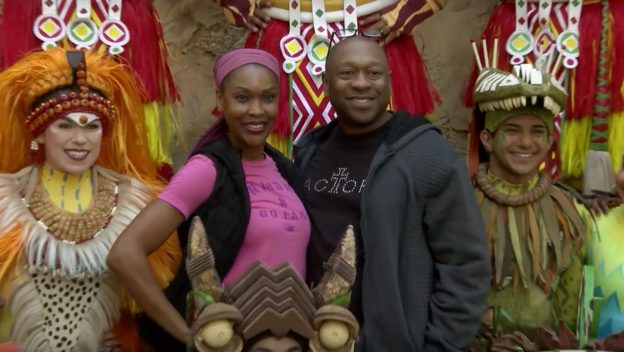 I just saw the road tour production of Disney’s The Lion King musical, which is currently performing at the Dr. Phillips Performing Arts Center in downtown Orlando, FL. (Don’t get me started on why Disney doesn’t have a Broadway caliber theater at Walt Disney World… that’s a post for another day.) It’s a very entertaining show and it’s easy to see why it’s helped make The Lion King the most successful franchise in the world.

Of course, there already is a permanent The Lion King show in Orlando. The Festival of The Lion King at Disney’s Animal Kingdom takes elements of the movie, The Lion King Celebration parade from Disneyland, and African folk stories and produces the consistently highest rated attraction at Walt Disney World.

In a new video shared by Disney, two stars of the Broadway cast of The Lion King Musical visited Festival of The Lion King to enjoy the show and meet its talented cast members. Watch the video here:

Kissy Simmons (Nala) and Alton Fitzgerald (Mufasa) were in town as performers in the Disney On Broadway concert series as part of the 2nd annual Festival of the Arts at EPCOT.

Everyone I’ve talked to who has been in any production of The Lion King tells me the same thing — it is one big giant family. Each production forms their own family, but anyone who has ever participated in any show shares a kinship. Watch the show carefully next time you are at Disney’s Animal Kingdom and you’ll see how it comes through in each show.

If you love both versions of The Lion King, you can pick up the soundtracks on Amazon. Here’s the a recent 2-disc set of the Broadway cast recording and the Festival of the Lion King CD.