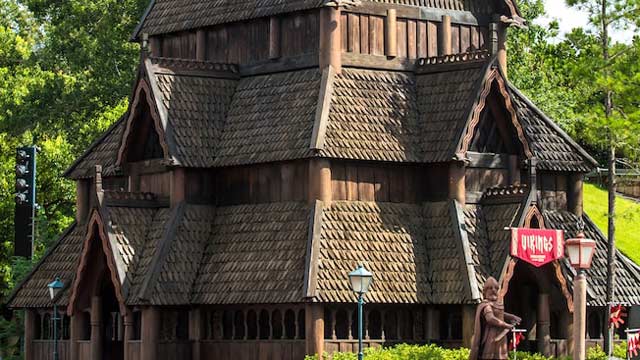 The mini-museum inside the Stave Church at EPCOT’s Norway pavilion is closing March 12 to begin work on installing a new exhibit. The current exhibit ‘Norsk Kultur: Inspiration for Disney Frozen’ was added as part of the Frozen Ever After additions to the pavilion and highlighted how the movie drew from the folklore and architecture of Norway and surrounding regions for Disney’s uber-popular animated feature.

The new exhibit will be called ‘Gods of the Vikings’ and will tell the stories of popular Viking gods like Thor, Oden, Freyja, and Loki using authentic Viking artifacts and other elements.

The Stave Church itself is inspired by a type of structure relatively common in Norway and other parts of Europe. The name comes from the building’s post and lintel construction featuring timber framing called ‘stav’ in Norwegian.

We’re happy to have more Vikings back in EPCOT’s Norway pavilion. How about you?