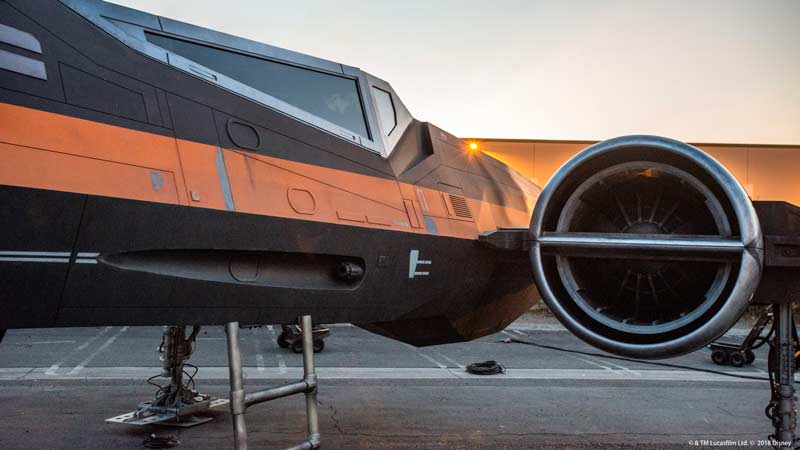 We were excited to see this photo of a X-wing Starfighter that is currently being developed for Star Wars: Galaxy’s Edge at Disneyland and Disney’s Hollywood Studios. When Star Wars: Galaxy’s Edge opens in 2019 it will transport guests to a remote trading port on the edge of space, where Star Wars characters and their stories come to life. Guests will encounter characters and experiences from across the Star Wars galaxy including rebels, First Order forces, and a plethora of other stories.

To accommodate the traffic expected from the new Star Wars-themed land, Disney’s Hollywood Studios is creating an entirely new entrance to the parking lot creating a giant new intersection that will route cars directly from World Center Drive, I-4, and Osceola Parkway right into the parking lot with minimal fuss. At night all traffic, except Disney buses, will use this same route as an exit. The parking lot is also in the process of being expanded to near double its original size. Disney is also adding an entirely new mode of transportation that will bring guests directly to the front gate of Disney’s Hollywood Studios – the gondola (aka Mickey’s Skyliner).

The Disneyland Resort, hasn’t yet started on its proposed new parking structures. The original expansion known as the Eastern Gateway has been canceled in favor of a new garage and hotel on the Western side of the property. So, if you are planning to visit in 2019, consider some transportation alternatives, or stay on property, to beat the crowds.

The two Star Wars: Galaxy’s Edge lands will be essentially the same with two main attractions (Encounter with the First Order, and pilot the Millennium Falcon) and a collection of Star Wars themed stores and restaurants. The idea is that you are actually on the planet Batuu and the environment around you will reflect that.

Disney has very successfully pulled off this idea with Pandora – The World of Avatar at Disney’s Animal Kingdom. Star Wars: Galaxy’s Edge promises to take it to the next level where all the merchandise sold in the land will be ‘in theme.’ Meaning no Mickey Ears, souvenir t-shirts that say Star Wars: Galaxy’s Edge on them, etc. There will be more generic merchandise for sale elsewhere in the park, just not inside the immersive land itself.

Disneyland’s version is expected to open earlier in 2019 than Disney’s Hollywood Studios edition, just because of the later construction start date at DHS. Although, DHS was able to catch up quite a bit due to the delays caused by rain in California.