And now we come to what is probably the most divisive of the Marvel Cinematic Universe movies – Iron Man 3. When it came out in 2013, there seemed to be no middle ground. You either loved the movie or you hated it.

This division makes sense in a way. The movie before this one, The Avengers, was huge in scope. Multiple heroes. An alien army. It had it all. Iron Man 3, by comparison, is much smaller. There are fewer heroes and the whole world isn’t at stake (which, by the way, is why it’s ok that the other Avengers don’t show up to help. The Avengers come together when the threat is too big for one hero. Aldrich Killian ain’t that threat). When comparing Iron Man 3 to The Avengers it feels like a step back. Comparing it to its actual predecessor, Iron Man 2, puts it in a different light. 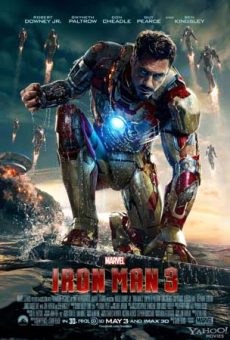 Iron Man 3 also set the bar for the rest of Marvel’s Phase Two, in that it doesn’t point toward any future movies. The Phase One movies pointed toward The Avengers as the culmination, but the Phase Two movies are largely independent of each other, pointing, if anywhere, backward.

Fans were also divided on the twist with the Manderin and having Tony team up with a young kid. These two decisions do feel out of place in the MCU in general, and in Tony’s world specifically. On the other hand, in a universe full of tropes, it’s good to know that Marvel can still throw out some unexpected curve balls.

What did you think of Iron Man 3 when it was first released? Have your thoughts changed over the years?