Novelization of Star Wars: The Last Jedi to restore scenes cut from movie

In Star Wars: The Last Jedi we follow the further adventures Rey and her friends Finn, Poe, BB-8 and General Leia Organa. We also finally get to see what Luke Skywalker has been up to. A new novelization written by New York Times bestselling author Jason Fry will be hitting shelves soon. 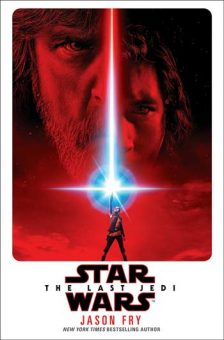 If you felt like a few things were missing from Star Wars: The Last Jedi, you weren’t alone. When a movie approaches 2 hours and 30 minutes like The Last Jedi did, some things inevitably end up on the cutting room floor.

The good news for you is the novelization of the movie plans to put some of those scenes back in. One of them is the missing ‘third thing’ Luke promises to teach Rey about the Force. The Star Wars show recently revealed a few quick cuts from that deleted scene as they talk about the novelization.

Jump to minute 3:52 for the good stuff about the new book and the deleted scene:

Another scene cut from the movie that we will read in the novelization is Han Solo’s funeral. Also included will be more information on the Canto Bight planet excursion with Rose and Finn.

Fry has co-written more than 40 novels, short stories and other works set in the galaxy far, far away. You may also know him as the author of YA adventure series “The Jupiter Pirates.”

The new Star War: The Last Jedi book will be released March 6th, but you can pre-order now and save up to 35%.