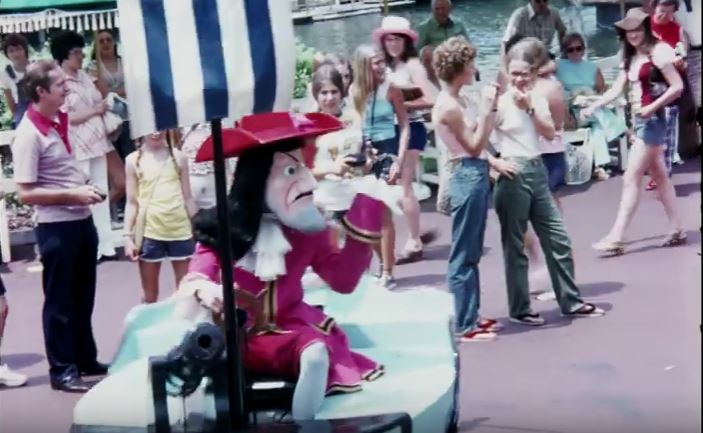 Jeff Altman works with film and video for a living so when he found a 16mm movie of vintage footage from Walt Disney World in his grandparent’s house, he knew just what to do — restore it. The movie features scenes from the late 1970s and early 1980s in the Magic Kingdom. Short of a time machine, this is one of your best chances to see the park as it was back then.

I love when Altman’s grandmother playfully dances with Chip and Dale. That footage of the original Main Street Electrical Parade is really amazing too. Light up Toy Soldiers…. who knew? Look how lush the Submarine Lagoon was. The parade, with Captain Hook riding around on his own little boat, is wonderful too. I just wish there was sound.

We asked Altman what is involved in restoring a film like this, “The restoration process requires physical repairs to film; fixing any tears, broken splices, and removing surface level dirt,” said Altman. “Then it is scanned at a high resolution and eventually getting a basic color correction to account for any fading the film may have experienced from age.”

According to Altman this was likely his grandparents first visit to Walt Disney World. He knew they were Disneyland fans because he had previously restored a Disneyland film of theirs filmed shortly after the park opened. We first saw this video in 2009, but now Altman has uploaded it to YouTube. Check out his grandparent’s brief meeting with Walt Disney himself.

Altman’s grandparents retired in the Orlando area they liked it so much. Who knows? Maybe there’s more great home movies out there? Be sure to check out Jeff Altman’s youtube channel for other film restorations he’s done.

A huge thanks to Altman from all us Disney fans for bringing these moments back to life so vividly and to his grandfather for shooting the original film.