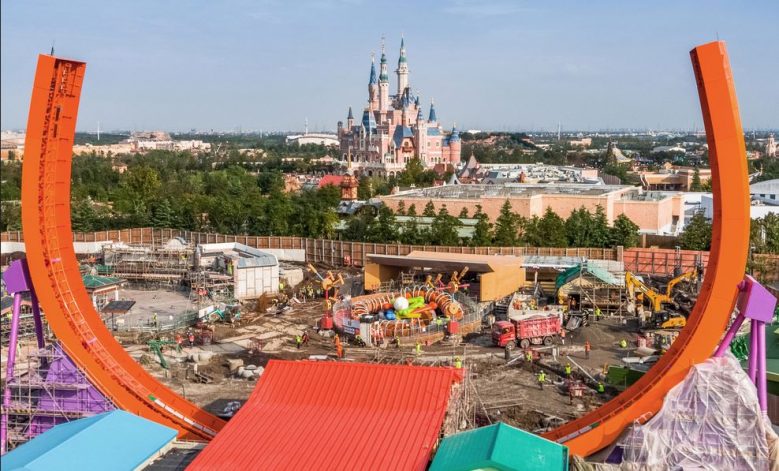 Shanghai Disneyland’s seventh themed land – Toy Story Land – is set to open on April 26, 2018, welcoming guests of all ages into a world of fun and imagination based on characters and setting of the Pixar Toy Story movies. The resort hopes to provide yet another reason for guests to enjoy the storytelling and creativity of Shanghai Disneyland.

It was just a few days ago that Shanghai Disney Resort revealed the concept art for their new Toy Story Land, now the new land is seemingly almost ready to open. It’s not magic, it’s planning ahead. Disney’s construction team actually laid much of the foundation for this project while they were working on the rest of the park, the work of loading in the attractions and theming the area was just left until later.

Now major construction of Disney Toy Story Land is close to completion, and will be followed by an extensive preparation period, which includes ride testing and adjustment and trial operations, in anticipation of the day when guests will officially be welcomed as “honorary toys” in the backyard of Andy, the boy from the Toy Story films. Disney Toy Story Land will be a high-spirited, colorful world where guests will feel as if they’ve been shrunk down to the size of their favorite Toy Story toys for laughter and fun with family and friends. Woody, Buzz and their Toy Story pals come to life and play in this fully immersive land, which features three new attractions – Slinky Dog Spin, Rex’s Racer, Woody’s Round-Up, a uniquely themed character greeting area, Meeting Post, and immersive shopping and dining experiences, Al’s Toy Barn and Toy Box Café.

Disney Toy Story Land comes from a collaboration between Walt Disney Imagineering, Pixar Animation Studios and a group of renowned international and Chinese designers, engineers, artists and cultural advisors. As the first post-opening expansion project of Shanghai Disney Resort, Disney Toy Story Land broke ground in November 2016, only six months after the resort’s grand opening. The team behind the land has already celebrated numerous construction milestones, including the successful installation of the U-shaped track of Rex’s Racer, the thrilling ride hosted by the insecure Tyrannosaurus toy named Rex and his Stegosaurus friend, Trixie.

The opening date of Disney Toy Story Land, April 26, 2018, will also mark the second anniversary of the opening of the highly successful Shanghai International Tourism and Resorts Zone, and the timing will ensure the expanded attractions and entertainment will be available in advance of the summer season.