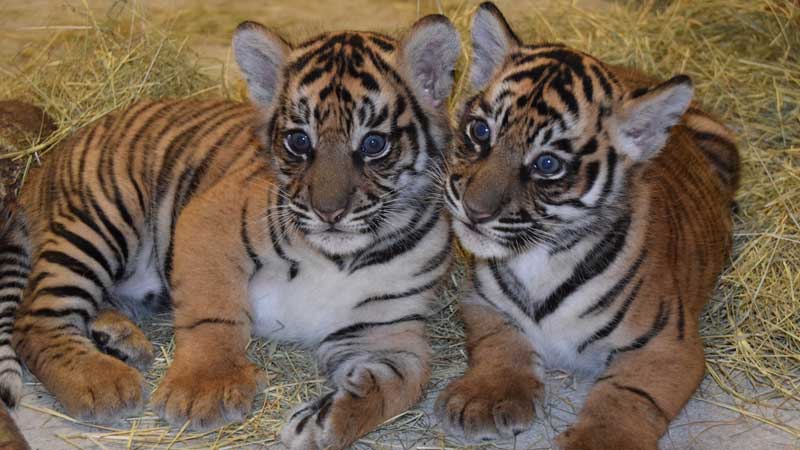 The animal care program at Disney’s Animal Kingdom continues to produce important conservation results for endangered and threatened species. In August the park welcomed the birth of two endangered Sumatran tiger cubs. They’re extremely cute, but their species is endangered.

The Sumatran Tiger is a subspecies found only on the Indonesian island of Sumatra. With fewer than 400 of majestic animals left in the wild, any new births are something to be celebrated.

Disney’s cubs are now 2 months old. The cubs are playful and have developed a good bond with their mother Sohni.

The park has now given them names that reflect their personalities: Jeda, the male cub (above left) and Anala, the female cub. Jeda means ‘pause’ in Malay, and reflects Jeda’s laid back personality. Anala means “fiery, sizzling” in Hindi, capturing her independent spirit and curiosity. “The cubs wrestle with each other constantly and love jumping on plants and logs,” said Erin Heavey, an animal care specialist at the park. “Jeda in particular loves ripping the bark off the logs and playing with all the pieces that come off. Anala is becoming more adept at sneaking and pouncing and loves hiding behind things (even when she isn’t entirely hidden) and trying to surprise attack Sohni or her brother. This is actually something she gets from Sohni, who loves to “hide and sneak” even though she isn’t always very covert about it.”

Disney has decided to support the efforts of the Wildlife Conservation Society (WCS) and their partners who are working to reverse the decline of Sumatran tigers in the wild. Part of the funding came from park guests who unlocked at $100,000 contribution via the Connect to Protect mobile adventure inside Disney’s Animal Kingdom.

In this video Dr. Anne Savage explains the significance of their work.

Agressive deforestation and poaching are the chief villains in the Sumatran Tigers struggle to survive. You can help by supported efforts to use renewable resources in construction and refusing to buy products made of tiger parts.

The Walt Disney Conservation Fund has committed $1 million to protect and restore habitat of at-risk wildlife through the connect to protect program.