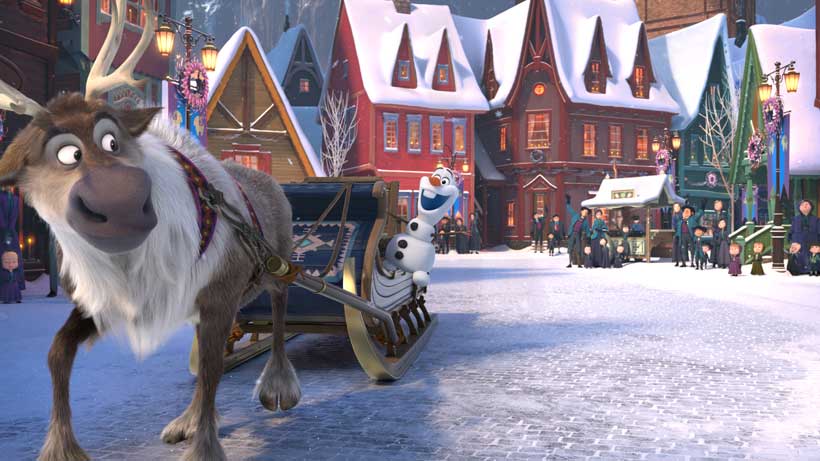 “Olaf’s Frozen Adventure” is an animated 21-minute mini-feature that will play in front of Pixar’s “Coco” when it opens in theaters on November 22, 2017. You may have heard of its big cousin, the mega box office hit “Frozen.” The soundtrack for the animated feature helped propel it into the atmosphere, and now Disney is releasing a soundtrack listing for the animated short. Perhaps the result will be the same?

The featurette welcomes back to the big screen the celebrated cast and characters from “Frozen,” including Josh Gad as unforgettable snowman Olaf, Idina Menzel as Elsa, Kristen Bell as Anna, and Jonathan Groff as Kristoff.

Emmy-winning filmmakers Stevie Wermers-Skelton and Kevin Deters said that the music helped shape the story in unexpected ways. “Music has always been a hallmark of Disney Animation, especially the world of ‘Frozen,’” said Deters. “So we’re thrilled to include four new songs to help tell our story.”

“Kate and Elyssa have such a sense of fun and enthusiasm,” added Wermers-Skelton. “The songs really capture the spirit of Olaf and his holiday endeavor.”

The featurette/soundtrack’s original songs include “Ring in the Season,” “The Battle of Flemmingrad,” “That Time of Year” and “When We’re Together. The soundtrack also includes “Olaf’s Frozen Adventure” Score Suite by Beck, the traditional version of “The Ballad of Flemmingrad,” plus bonus tracks with instrumental/karaoke versions of each new song.

“Olaf’s Frozen Adventure” soundtrack will be released in physical and digital formats by Walt Disney Records on Nov. 3, 2017.

Audio snippets of 3 tracks can be heard here:

“That Time of Year”

Repost from @joshgad ———————————————–Check out this sneak peek of “That Time of Year” from #OlafsFrozenAdventure, in theaters before #PixarCoco this November!

Repost from @idinamenzel ———————————————–Here’s a sneak peek of “When We’re Together” from #OlafsFrozenAdventure. Sing-along when you see the #Disney short in theatres before #PixarCoco starting Nov. 22! ❄️?

“Ring In The Season”

Do you sense any mega-hits already? What will keep the kiddies singing all Christmas season?