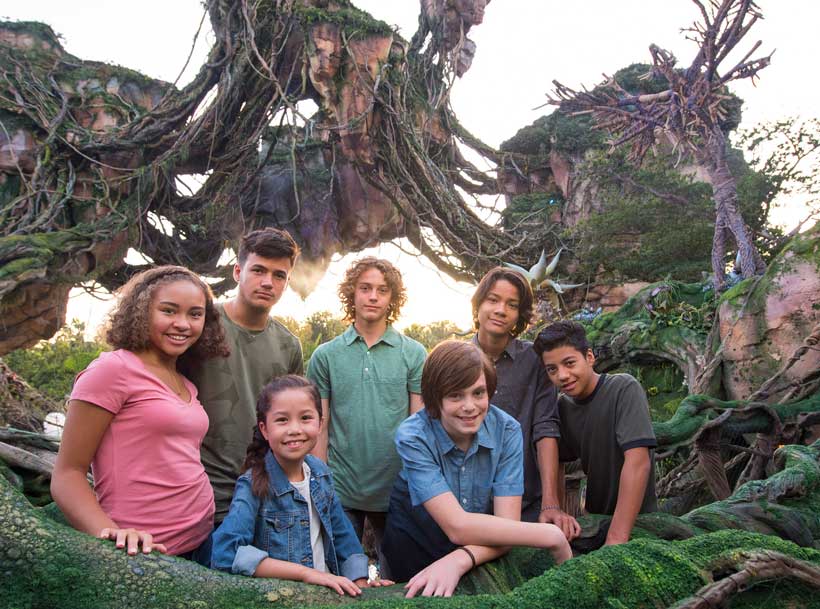 I share this with you mostly because I’m happy to see that James Cameron is still interest in “Pandora – The World of Avatar” at Disney’s Animal Kingdom at least as far as using it to promote his upcoming four sequel movies. For the new young cast, they’re getting a deep immersion in the world of Pandora, unlike they can get while filming using motion capture technology.

The visit was organized by “Avatar” filmmaker James Cameron and film producer Jon Landau to acquaint the seven young actors with the world their film characters will inhabit and to inspire their performances. The visit did all that and more, with the actors coming away awestruck by the mystical world of massive floating mountains, bioluminescent rainforests and breakthrough experiences. Pandora – The World of Avatar opened in May to rave reviews as the newest land at Disney’s Animal Kingdom.

“It was important to bring the newest members of the cast to Pandora to help them prepare for their roles in the film,” said Landau. “Typically, actors are introduced to a film through digital imagery and virtual sets. Our walk-through delivered on-the-ground sights, sounds and experiences that brought to life for the cast this wondrous world.”

Chosen from around the globe, the young cast is the cornerstone of upcoming sequels to be released by Twentieth Century Fox. The visit Pandora – The World of Avatar exceeded their wildest dreams.

Bass, who will play Tsireya, the young Neytiri of the ocean, reflected on the visit to Pandora.

“I am touching everything because I need to remember how it feels on my hands, how everything smells, how everything looks,” she said. “I took a bunch of photos just so I can look back and see what I went through. I am going to bring that back so I can portray my character and understand how she witnesses her world.”

Throughout the two-day visit, the cast was transported to a majestic and alien world. They sailed through a bioluminescent rainforest on Na’vi River Journey, where they were awed by the Na’vi Shaman of Songs. The cast also flew on the back of banshees in the Avatar Flight of Passage attraction that took them over the stunning world of Pandora.

Cameron’s original “Avatar” film was a blockbuster hit that left millions of moviegoers longing to visit the Pandora he created digitally for the big screen. That’s now possible at Pandora – The World of Avatar. And although the physical world of Pandora at Disney’s Animal Kingdom doesn’t recreate specific scenes from the film (it’s set a generation after the events of the films) it represents the film’s core messages of exploration, preservation, and conservation.

Pandora – The World of Avatar is a unique partnership between Walt Disney Imagineering, James Cameron and Lightstorm Entertainment that brings to life the extremely vivid, authentic experience of an alien world.

“This is really the collaboration of two master storytellers, Disney and LEI,” Landau said. “Story is at the heart of Pandora the land and Pandora from the movie franchise.”

The four “Avatar” sequels will be filmed concurrently. Twentieth Century Fox will release the first sequel in theaters nationwide on Dec. 18, 2020.