Hurricane Irma related closures at Disney and in Orlando 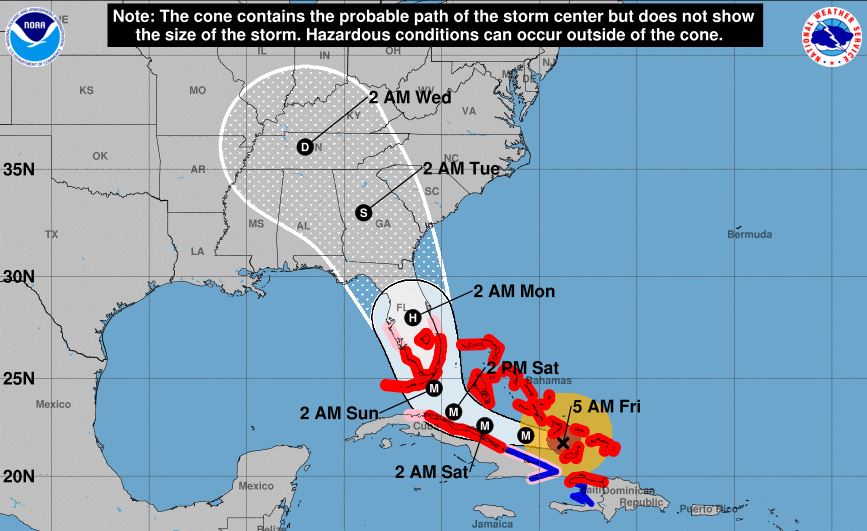 It’s Friday and the storm isn’t expected to bring tropical storm force winds to the area until Saturday afternoon, but already we’re getting news of closures in the Orlando area that might impact your Disney vacation? We’ll keep track of them here and update this story as we learn more. As always, keep a close eye on weather forecasts from a trusted news source.

Update: The currently forecast path (5am on Friday) has the eye of the storm going very close to Walt Disney World (and our home). Wish us all luck! Also note that Central Florida is now under a hurricane warning, activating Walt Disney World and Universal’s hurricane policy that allows many on-property guests to re-book with no-penalties. Call your travel agent for re-booking if this applies. (end)

First, and important to know for those who plan to fly into or our of Orlando, the Orlando International Airport will cease all commercial flights at 5pm on Saturday. Melbourne International, Sanford International, and St Petersburg airports have also announced pending closures. If you have a flight to the Orlando area, check with your airline and travel agent to see what your options are.

If you live in Orlando you may have had tickets to Disney on Ice at the Amway Center this weekend. Those performances have been postponed. A return engagement is scheduled for May 2018. Specific dates remain to be determined. Tickets will be honored for the rescheduled performances. Stay tuned to this blog or Amway Center’s website for further details.

Walt Disney World sent out a message to travel writers and bloggers today saying that they plan to be open on Friday and Saturday as normal. Crowds are already pretty light as people adjust their travel plans. If you happen to be at Disney you should enjoy low waits the next few days. Just have a care for cast members who have to work while worrying about their homes. Keep in mind that the 11pm update on 9/7 (above) showed Irma accelerating and arriving in Central Florida with potential hurricane force winds as early as Sunday at 8pm. That means tropical Force winds will arrive late Saturday, possibly forcing Disney’s hand to close the parks to safely allow their cast to get home.

Update: Walt Disney World has announced phased closure of all parks (including water parks and ESPN wwos p on Saturday with plans to stay closed Sunday and Monday as well.

Saturday’s Night of Joy and Sunday’s Mickey’s Not-So-Scary Halloween party have been canceled.

One Disney resort has announced a closure – Disney’s Fort Wilderness Resort & Campground will close beginning Saturday afternoon. Last year during Matthew, Disney put up those guests in other rooms on property, I would expect something similar this year.

Other local Orlando closures include all K-12 schools and state colleges and universities closed Friday – Monday.

Update: SeaWorld has announced closures starting at 5pm on Saturday through at least Monday. They have taken in animals from southern Florida zoos and aquariums.

I do expect to get more closures from Orlando’s theme parks and attractions for Saturday. So stay tuned.

Disney’s Vero Beach and Hilton Head DVC resorts, both of which are on the Atlantic seacoast, have announced closures.

Our advice for those who have a Disney vacation planned during Hurricane Irma’s traversing of Florida.