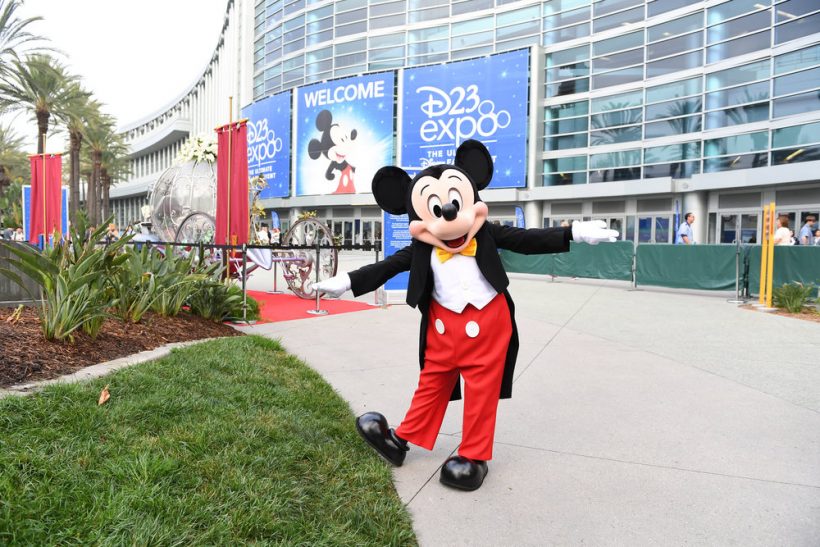 I arrived at the Anaheim convention center at 8:28 AM on Day 2 of Disney’s biannual D23 Expo. It started at 9, and I wouldn’t get into the show floor until 10. If you ever decide to make this insane trek for yourself, I suggest bringing sunscreen because you will most likely be in direct Southern California summer sunlight for at least an hour. I had hoped to see and do as much as possible over the course of the day, with my main goal being to attend the Parks and Resorts panel. But even with the aid of the D23 app, navigating the show floor was difficult, especially for a first time convention-goer.

I briefly made my way through the Marvel and Pixar areas, until I settled on waiting in a line for the Disney Archives’ A Pirate’s Life for Me exhibit. The exhibit took guests through Disney’s history with Pirates, dating way back to the days of the silent Alice comedies, through Peter Pan and Pirates of the Caribbean and others. I had heard there would be old animatronics from the original POTC ride, and there were, but not as many as I had hoped. Much of the exhibit focused on props and costumes from the Pirates of the Caribbean films.

I continued to walk the show floor and saw many, many long lines, so I started getting nervous about making it to the Parks panel. It was clear from the beginning that Disney had let too many people into the expo, and complaining amongst the crowds was rampant. It took asking four cast members to find the start of the already immensely long line for the panel, which wasn’t for over four hours. I bought some snacks and prepared myself for the long haul.

Eventually the line made its way into an underground holding area that resembled a parking garage; a stark contrast to the lively, upbeat decor of the show floor. Cast members yelled about D23 Gold Members’ priority access to the panel, etc. etc. As the line began to diverge into multiple paths, I asked where non-Gold members should go, and I was directed to a line marked by a giant “D23 Gold Members Only” sign. Okay.

As you can see in the video, an eternity passed while I was down there, but luckily I bumped into one of the people who trained me at Universal so it was nice to have a familiar face to talk to. And after hours of waiting, the grand moment finally arrived. It was cool to be in the room as Disney Parks history was made, despite my somewhat deterred enthusiasm from waiting in lines all day. There was a lot of cheesy Disney filler, which was mostly enjoyable, but in the end what it boils down to for me is the announcements.

I tried to recreate how I viewed the presentation in the video above, but here I’ll go into a bit more detail:

Star Wars: Galaxy’s Edge (Disneyland/Disney’s Hollywood Studios) – I would have appreciated more details, but I am so damn excited for this project I’ll take anything. The few that we got as well as the video “flyover” of the land model was really cool.

Mickey and Minnie’s Runaway Railway (Disney’s Hollywood Studios) – While the technology behind this ride looks amazing and it’s high time that the mouse himself got his own ride, I’m not a huge fan of the art style of the most recent Mickey Mouse cartoons that the Imagineers decided to go with. It conflicts with practically every other depiction of these characters in the parks and that just doesn’t sit well with me. Not to mention that it’s replacing The Great Movie Ride, and isn’t coming to Disneyland after all as had been rumored.

Ratatouille Ride (EPCOT) – A perfect addition to the France Pavilion.

Guardians of the Galaxy Ride (EPCOT) – As a ride this will probably be superior to Mission: Breakout since they actually have to build a brand new ride system from the ground up instead of just slapping a new coat of paint on an existing one and calling it good. But it simply does not belong at EPCOT. Future World is intended to depict the possible applications of real-world science and technology. Science Fiction has long since been relegated to Tomorrowland, but apparently they’re one and the same now. The speaker’s’ insistence that this franchise somehow fits into the “original vision” for EPCOT was forced and absurd.

Space-Themed Restaurant (EPCOT) – A perfect addition to Future World. (What we know so far)

Tron Roller Coaster (Magic Kingdom) – As a huge Tron fan, I cannot wait to have a ride based on the series in the states. But I am surprised that it’s not coming to Disneyland, as had also been rumored, especially since our Tomorrowland is in much greater need of an update. It sounds like this version of the Shanghai Disneyland original might nix the outdoor section of the ride, which is 100% fine by me as I don’t really see how the great outdoors fits into the concept of being derezzed into a high tech computer system anyway.

Disney Skyliner (Walt Disney World) – This long distance throwback to the parks’ gondola systems of old looks like it will give guests yet another entertaining option for transportation around the resort.

Pixar Pier (Disney’s California Adventure) – Paradise Pier is one of the least Disney-esque areas in California Adventure in my opinion, so I think adding some Pixar flair could be just what it needs to give it some heart. But it’s relatively soon opening date of Summer 2018 makes me question how elaborate it will be.

Marvel Land (Disney’s California Adventure) – They essentially told us nothing.

Overall, I think it was a good panel with a lot of announcements to look forward to.

Afterword I found the Galaxy of Stories area that housed the Galaxy’s Edge land model and some other assorted props from the project. The model is very impressive, but the vantage point could have been better. Viewing it from the side, it killed me to not be able to examine this thing from above as has been done with the large model of Disneyland on display at the Disney Family Museum. But this was just a temporary convention set up, so I get it. I loved seeing the roaming droid; having many of them roaming the land should really add some atmosphere. It didn’t seem to want to stop for anyone’s selfies despite cast members’ assistance, which I argue is a good thing.

Then I bought an EPCOT pin and got the hell out.

All in all, D23 does not seem to be for me. Though the different booths and areas were very well designed, it was incredibly difficult to enjoy myself knowing that I had essentially paid to wait in line for more than half of the time I was there. That other chunk of time had some fun moments, but I don’t think I’ll be attending the next D23 unless Disney addresses its capacity issues.