Videopolis: Postmodern Jukebox takes on Beauty and the Beast 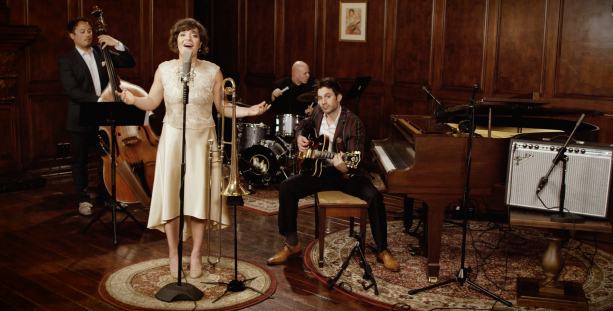 Postmodern Jukebox is the ‘living-room’ band that exploded onto the scene with its covers of modern hut songs in the style of classic genres. You may remember band leader Scott Bradlee’s ragtime Aladdin medley or their slow jazz cover of the “Ducktales Theme Song.” One of the frequent singers of the band, Sad Clown Puddles, recently appeared on America’s Got Talent singing “Chandelier” by Sia

although his version of Lorde’s “Royals” might be more impressive.

Another good example is a cover of Rihanna’s “Umbrella” in vintage ‘Singing in the Rain” style with Casey Abrams and a pair of talent tap dancers.

It’s always amazing to me how well Bradlee is able to arrange the modern films to sound like they originated sometime in the past.

PMJ’s newest song (there have been dozens released over the last 4+ years) is a jazzy take on Disney’s classic theme song from “Beauty and the Beast.” This one features Singer and trombonist Aubrey Logan in a vintage French Cafe style performance. Check out the winsome vocals here:

Postmodern Jukebox is one of the acts coming to Eat to the Beat concerts at the Food and Wine Festival. I hope they’ll play at least a few of their Disney covers. PMJ has also announced a Disney album is on the way. We’ll keep an eye out for that too.