The Music of Pixar LIVE! A Symphony of Characters highlights 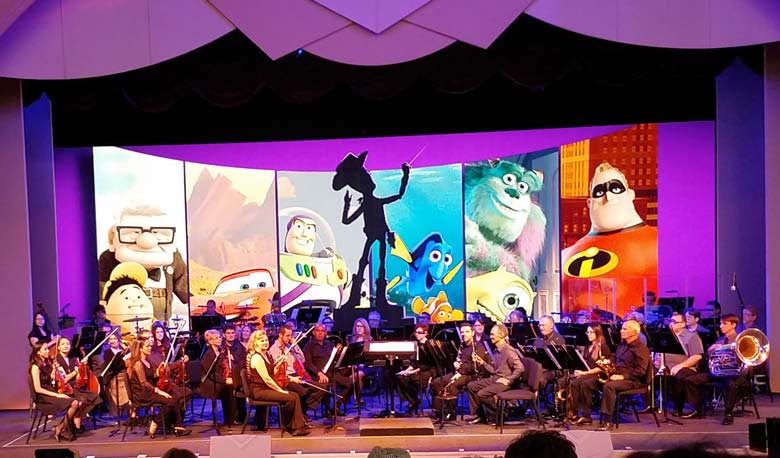 A new show at Disney’s Hollywood Studios celebrates Pixar’s 30 years of beautiful music that made cinematic history. The Music of Pixar LIVE! A Symphony of Characters performs nightly at Theater of the Stars and featurs special appearances by some of your favorite Pixar characters along with a 50 piece orchestra.

The show features six segments, each with their own set of characters as an introduction. Music from the following movies are featured in each segment, “Up,” “Cars,” “Toy Story,” “Finding Nemo,” “Monsters Inc.,” and “The Incredibles.”

As the symphony plays, a giant screen features the corresponding moments from the film. There are also outtakes and interviews with VIPs from Pixar.

Update: Disney has shared the following interview with Pete Docter

Also we were able to interview the Show Director for The Music of Pixar LIVE!

Right now the park is scheduling three performances a night at 5pm, 6:45pm, and 8:15pm. We recommend lining up about 20-30 minutes early to get in and get a seat.

Watch these highlights from the media preview:

One observation from the first couple of shows. At around 45 minutes long, that’s a long committment for the average tourist family. A number of guests were getting up and leaving inbetween segments. Disney could help with this by providing a short intermission after the second segment.

The only reservations for the show are through the Music of Pixar Live! Dining Package. After dining bring your voucher to the Theater of the Stars for reserved seating. If getting an up-close look at Pixar’s characters is important to you, this is your best option. That said, there’s no bad seat in the house. The projection is large enough to be seen from the back of the house and the theater has good sound throughout.

We’re happy Disney’s Hollywood Studios is making use of the Theater of the Stars in the evening hours. It’s a great way to escape the crowds of the park and rest your feet a bit.

previousNew summer flavors arrive at Vivoli il Gelato in Disney Springs
nextShould Wall-E have a larger presence in the parks?