Comparing the refurbished Disney Wonder to rest of Disney’s fleet How does refurbished Disney Wonder stack up against the rest of Disney’s fleet of cruise ships?

I’ve been on three of Disney’s cruise ships, although never for very long. Most recently I had a 3-hour tour of the Disney Wonder, which included a performance of Disney’s Frozen as a stage musical. It looked great to me, but I \had little historical context to understand the changes. Good thing I knew that a reader of this blog, who has taken dozens of Disney cruises over the years, was about to embark on his on cruise aboard the wonder. He sent me this excellent trip report from his first visit aboard the refurbished Disney Wonder:

Well I just got back from a cruise on the Disney Wonder which recently went under the knife for a major refurbishment. I was cautiously optimistic for the upgrades to the Disney Wonder but also scratching my head as to why they decided not to add the Aqua Dunk like they did to the Disney Magic. I realize the Wonder cruises in Alaska for a good portion of the year, but the water is heated, kids in general do not have nervous systems that can feel cold water,(at least my nephew does not) and the aqua dunk was such a fun slide. That slide is in my opinion far more fun than the Dream class Aqua Ducks, and with the added bonus of a shorter wait tie.

On a side note, I can now confirm that the Disney Wonder does in fact have a ducktail added to it exactly like the Disney Magic did. This confirms that that was not added to Disney Magic because of the Aqua Dunk but rather just to regain some fuel efficiency an added life to the ship.

Before this Cruise I would have ranked the Disney cruise ships in the following order, closest to my heart and my most favorite is the Magic, followed by the Fantasy, then the Wonder, and finally the Dream. I was curious if the Wonder might beat the Fantasy for the #2 position.

Despite not getting an Aqua Dunk, the Wonder got many of the same upgrades that the Disney Magic did in 2014. 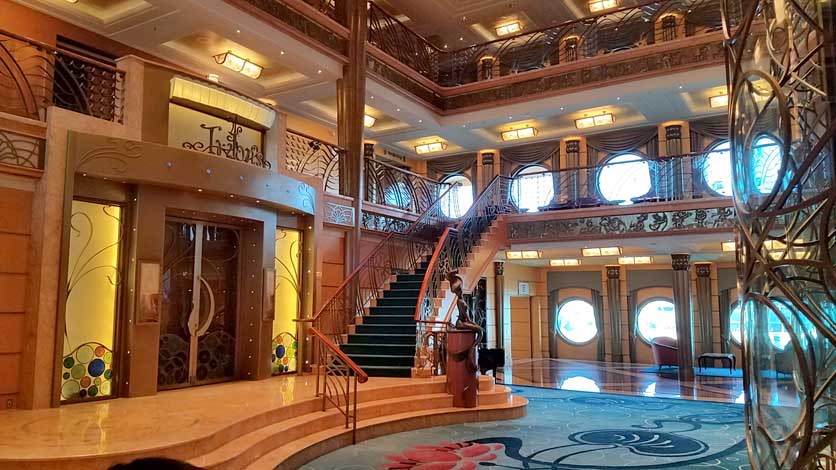 Disney Wonder Lobby was redone in nearly an identical way as the Disney Magic. Complete with the elimination of one of the staircases and moving the ship’s icon statue, Ariel, over to the right a bit. A lot of people don’t like this move but I do and I understand it gives what is actually a small Lobby a little bit more room to function. 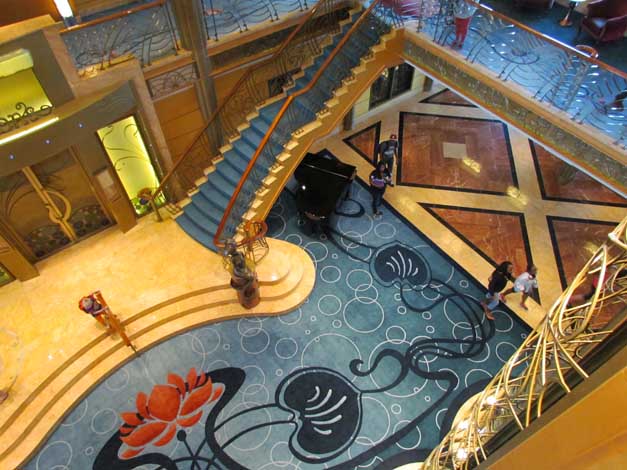 The original chandelier was removed and replaced with a smaller chandelier; however this one is still reminiscent of original Dale Chihuly’s artworks. I think it’s going to give some relief to those who really lament the removal of the original chandelier. For me it didn’t quite work as well. I really enjoyed the Disney Magic new chandelier in the lobby and I think it really matched the new Lobby nicely, while the new Chandelier on the Disney Wonder is also very nice I feel like clashes a little bit with the lobby. 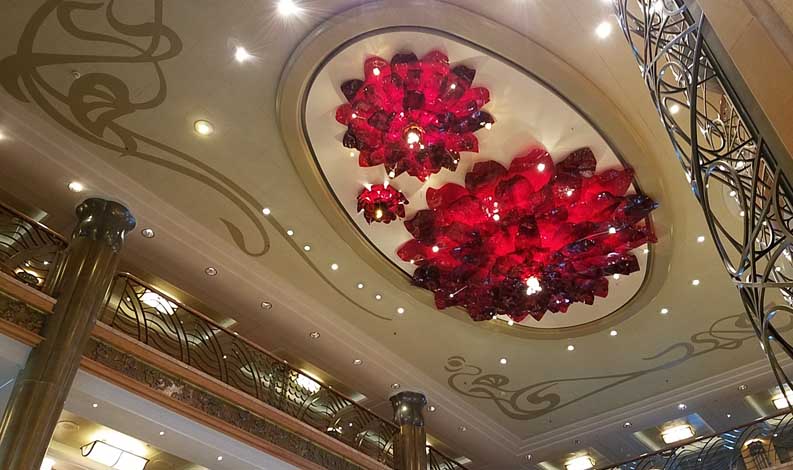 But that’s just the a nit pick on the Wonder, which really does now shine. I kind of had high expectations in two areas and the Wonder, and she did not fail to exceed those high expectations. Disney Wonder must now have the best rotational dining in the fleet. It still has the semi-formal Triton’s, which is now complemented by the all-new and spectacular Tiana’s place and the highly upgraded Animator’s Palate. 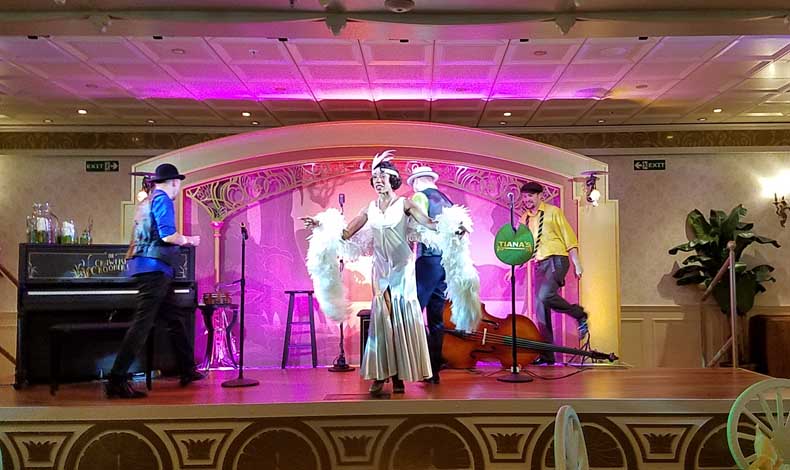 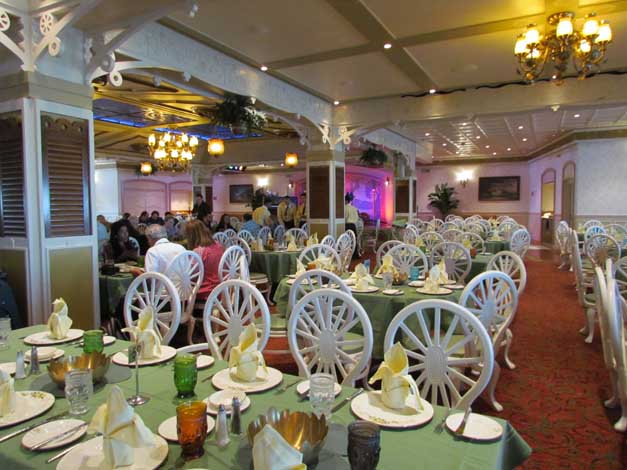 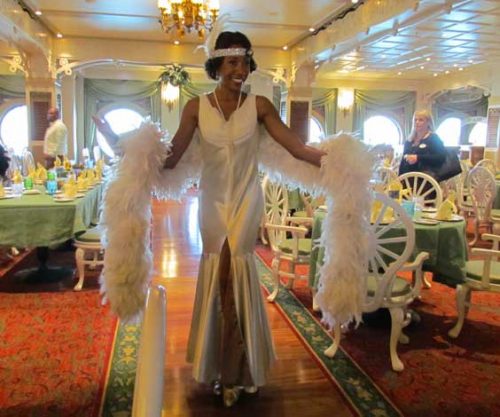 Tritons remains as the ship’s semi formal and elegant restaurant. Not a whole lot was changed here. That said of the four semi elegant restaurants in the fleet, I find Triton’s to be the weakest link. I prefer the Royal Palace and the Royal Court on the dream class ships, and Lumiere’s on the Magic. That said the Disney Wonder’s rotational dining more than makes up with it with the new Sensational Tiana’s place and and upgraded animator’s palate that now matches that of the one on the magic.

Tiana’s place is everything (Jose) Carioca’s on the Magic should have been and was not. It is fun and Lively just to walk into and the entertainment, yes there’s live entertainment and a lot of it, makes for a truly memorable Disney dining experience. This will no doubt be the Rockstar Superstar in Disney Wonder’s rotational dining group. That honor used to go to Animator’s Palate , but even with its upgrades , it does not surpass the experience of Tiana’s place as truly this may be the best rotational dinning experience in the entire fleet.

That said, the Classic ships Animator Palate has long held that title and like the Magic, Wonders now features LED screens, and vibrantly bright primary colors. The transition from black and white to color is just stunning and is simply far more fun than Turtle Talk on the dream class ships.

Palo was refurbished but not majorly remodeled. It is still fantastic and I did have time to squeeze in the sea Day brunch, truly a spectacular brunch not to be missed if you have the opportunity to enjoy. 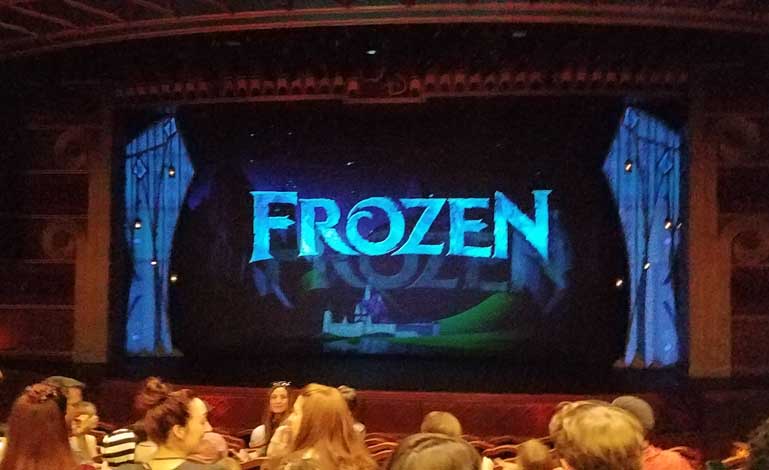 That said, if the Rotational dining is the heart of a Disney cruise, then the Walt Disney theater is the soul. The Disney Wonder now offers arguably the best three entertainment Production shows in the entire fleet. The underrated and always sensational The Golden Mickeys, the brand new and spectacular Disney’s Frozen, and they always sentimental Disney Dreams: An Enchanted Classic. There’s just not a weak link in these 3 production numbers. You might prefer one over the other but you will have to agree that all three are extremely well done. I’m not even a fan of Frozen, and more specifically I never liked the way the song Let It Go ends. Perhaps I was not the only one to feel this way as with out giving away too much, I will say intentionally or not, this critic of that song has been addressed in this version of the show. The adults only After Hours, seems a bit better done on the Wonder than it did on the magic. It also feels more complete. There’s some artwork in the stairwell near the elevators that’s a tribute to Route 66, the original theme of the area. Well played Disney Wonder! Also confusing on the Disney Magic is the fact that the public area restrooms inside the after-hours District still maintained their original theme and we’re not remodeled to match the new after hours Motif. This is not the case on the Disney Wonder. The Cadillac Lounge was refurbished but not remodeled and it’s still mostly the classic Cadillac Lounge. The sports bar was redone into the Crown and Fin Pub. Crown and Fin is absolutely rich in details and also features an exclusive beer which I tasted and enjoyed. Finally, Azure, the main lounge is beautifully modern while also feeling nautical. Overall they did a much better version of after-hours on the Wonder versus the Magic. However I still prefer the whimsical and fun nature of the nighttime districts on the dream class ships. I do wish the classic ships had keep the whimsical nature originally found in these areas.

The shops, like the lobby, got pretty much the same makeover as they did on the Disney Magic. They now match the Elegance of what you’ll find on the dream and fantasy. I really like what they did here on both ships Magic and Wonder. The original shops had begun to feel dated and the new shops feel more classic, and better match the Timeless nature of the rest of the ship.

Decks nine and ten are the topmost and outdoor decks on the Disney Wonder and they shine from bow to stern and have been completely refurbished and or remodeled. Starting from the bow, Senses Spa has been greatly updated. The rainforest room was structurally remodeled and now closely matches the amenities featured on the Dream Class ships. Complete with Turkish sauna, experience showers and steam room. If you’re looking for a dry sauna, you can find that in the men’s only and also the women’s only lounges. These parts of Senses Spa are still free. The dry sauna’s were upgraded with LED lighting new / relocated heating elements, all new wood along with all new showers and restroom facilities in the Spa lounges. The upgrades to senses Spa greatly exceed those that were given to the Disney Magic.

The Outlook Cafe used to be two levels with a bar on top and a coffee the bar on the lower level. The upper-level has now been completely redone. A small portion remains as part of the Outlook Café. The rest of the upper level has been converted into the Concierge Lounge. This provides the concierge guests their own bar and a lounge area that overlooks the adult pool and on top of this Lounge area is yet another deck reserved exclusively for the concierge guests. It is literally on top of the Outlook Cafe and Concierge Lounge, this new sun deck comes complete with plush furniture, shade awnings and wonderful views of the adult pool below.

The nearby arcade has been converted into edge, a teen nightclub.

Moving further down the upper deck, the children’s pool has had an aqua lab added which is a large Splash deck area with buckets dumping water on kids and a the Twist and Spout water slide, now greatly enlarged and for kids of all ages. Fyi, the stairs up to the top of twist and spout offer some of the most impressive views on the ship. Dory’s Reef has also been added to this area and is a little bit more fun and whimsical then a similar offering on the Disney Magic. 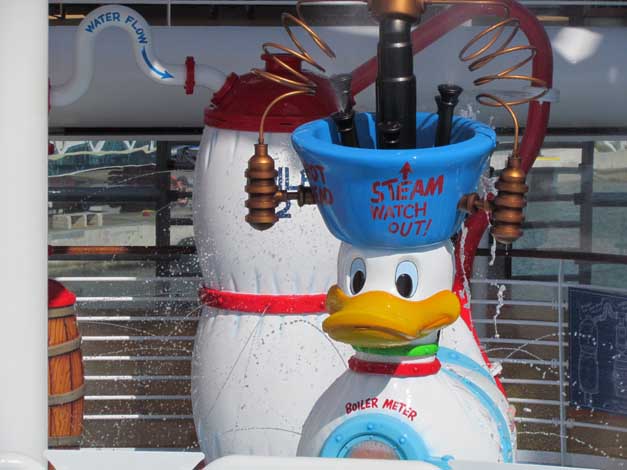 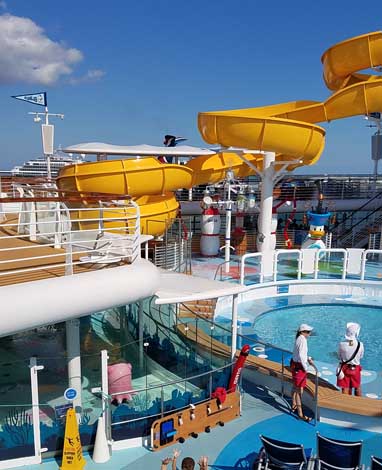 The buffet area rounds out the back of the top deck and is now called Cabanas. Cabanas offer several smaller stations instead of long Buffet lines, and is able to process much more people and a much shorter time frame. There’s nothing to not like here and Cabanas is an excellent upgrade versus the old Buffet.

As mentioned earlier in this overview of the Disney Wonder the heart and soul of any Disney Cruise Line is the rotational dining in the main Production shows. Disney Wonder knocks the out of the ballpark in both of these categories and in doing so it is with mixed feeling, and some shock….. I would now go with Disney Wonder First, then Disney Magic and Disney Fantasy in a neck to neck battle for 2nd place. Disney Dream rounds out the list but only because one of the four has too. Soon Disney Dream will replace villains tonight with Beauty and the Beast, another example of how Disney Cruise Line have kept all four ships so competitive with each other. For now, Congrats Disney Wonder, you have taken over as my new Favorite ship.