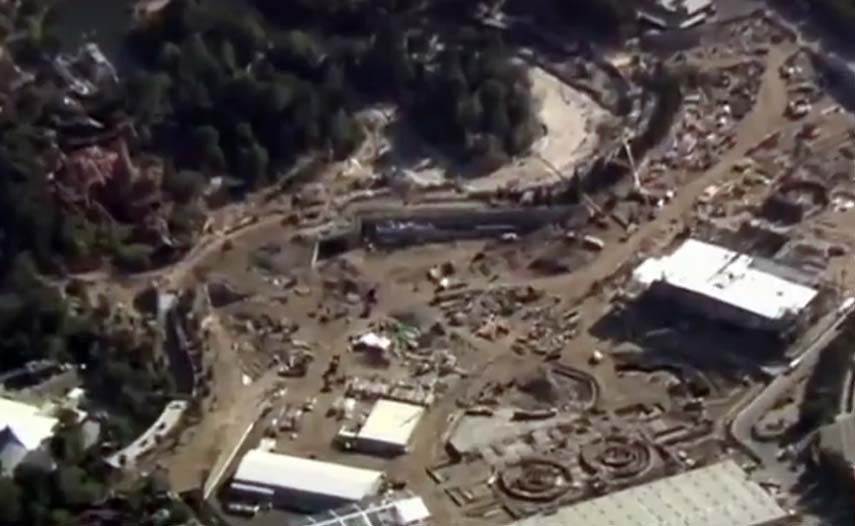 Unless you’ve been enjoying a long sleep in a galaxy far, far away, you know that Disneyland is adding a 14-acre expansion that will be themed to Star Wars galaxy. Two videos filmed earlier this week are giving us our latest look at the state of construction.

There’s still a long way to go, it’s not scheduled to open until 2019, but already we’re seeing some interesting details (previously: a look at the AT-AT walkers inside one showbuilding).

In the first video a new helicopter was hovering over Disney California taking a long look at the Guardians of the Galaxy ride as an employee needed some assistance getting down off the scaffolding. But at minute 9:50, the chopper heads over to the Star Wars themed area giving us our best aerial look in recent weeks.

One thing I’d note is that those two circles side-by-side are probably the ‘engine’ of the Millennium Falcon attraction. They look very much like the construction for Mission: Space out in EPCOT. However, we’re told it will be a different sort of simulator.

Some have posited that it’s a more likely a giant KUKA arm attraction like Sum of All Thrills but this time you’re on a track flying (although not exactly the KUKA technology since Universal has the rights to that). The movement won’t be as extreme, as this ride is expected to be appropriate for younger riders.

As a guest you will walk through a detailed queue that ends up with you boarding the Falcon and walking to the iconic cabin where you sit in one of the seats. You’ll then seamlessly take flight and experience the show via the motion simulator.

When the attraction is complete there will be four such circles to help with capacity.

There’s also a good look at construction around the re-routed portion of Rivers of America. If you look close you can see where the Fantasmic boats will cross under the track to go back to their storage facility. The second video was filmed from the Mickey and Friends parking garage vantage point just one day after the News Chopper video.

Hard to tell how soon Disneyland will be ready to open Rivers of America to water traffic and the Railroad, but the park wants that to be ready as soon as possible.

If you stick around until minute 9:45 you’ll get a glimpse of the Gullywhumper riverboat, destined to be a prop on the river.

I’m the sort of person who loves to get a look at all the construction work and speculate about what the final experience will be like. I hope they’re able to get it all done in time.