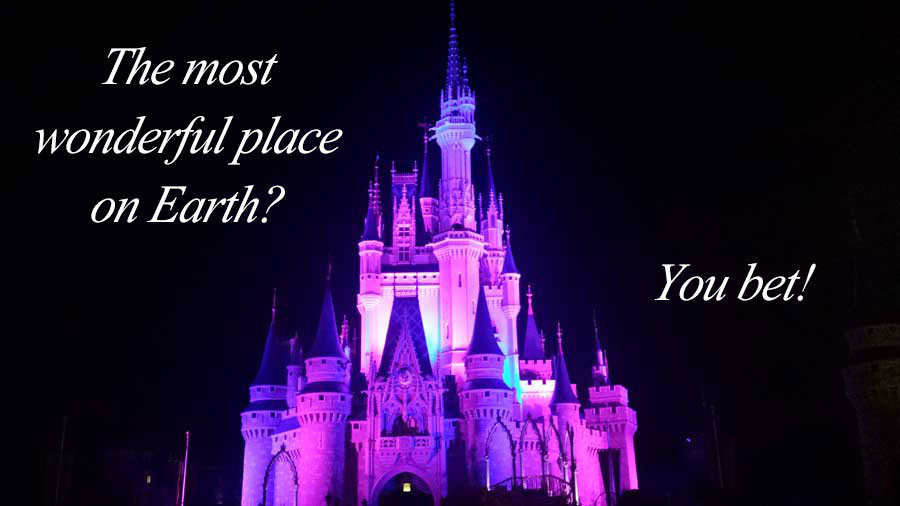 From CollegeHumor, the “comedy” geniuses behind viral YouTube videos such as Sex with The Hulk, Un-Safe Sex, Batman Can’t Stop Thinking About Sex, Back to the Future Sex Scenes and Why Girls Don’t Fart, comes an all-new sketch about what it’s like to go on a date with a Disney theme park fan. I have to say I’m a bit offended by how they choose to portray us Disney fans. Let’s take a deeper look at the video.

The transcript is below. From now on my comments will be marked like [this.]

A couple is having a romantic dinner at a classy restaurant.

Woman: So since we are flushed with cash from that go-kart settlement-

Man: It did not say anywhere that those things couldn’t handle sand dunes.

Woman: I think we should go on vacation.

Man: You thinking what I’m thinking?

The man proceeds to say “Disney World” while the woman says “Europe”. A look of horror grows upon the woman’s face.

Woman: Um… I was thinking that we could see the world and experience new cultures.

[I have to admit, this part had me laughing. Adult Disney fans, like any other group of fans, can indeed be weird, and I have been on several awkward dates that felt like this.]

[However, Epcot’s World Showcase does not have a Spain Pavilion.]

[Why don’t they just go to Disneyland Paris]

Woman: I’m sorry, why would we ever willingly go to Florida?

Man: Emily, there’s something I need to show you.

Dramatic music. Man reveals his Grumpy the Dwarf “This is my happy face” tattoo.

Woman: (Disgusted) Ew, I’ve had sex with you!

Man: It is the mark of my people, the mark of House Mouse. E’er since I was a boy, my brethren and I would make an annual pilgrimage to the mouse. Now, e’en though I am grown, my heart still yearns for the red rocks of Frontierland and the enchanted falls of Splash Mountain.

Woman: Sooo, you’re from one of those Disney families that goes there every vacation instead of venturing outside their comfort zones?

Man: … That would be an accurate assessment, yeah.

[While such families do exist, that’s quite a small box to put all adult Disney fans in like the title implies. Not to mention, it’s a bit cheaper to take your family to Disney than fly them all to Europe.]

[At this point you might be thinking, gee, does the blogger writing this commentary not have a sense of humor? Ehh, that’s up for debate. I just have a different sense of humor. A good one.]

[It’s almost as if the only issue here is that these two just don’t make a good couple.]

Man: Emily, Disney World is not a vacation, it’s a state of mind.

Woman: All the more reason not to go there, just go in your mind.

Woman: What do you even want to do?

[What could a person possibly want to do at Disney World? There’s just such a limited assortment of activities!]

Woman: Do you want to walk around wearing Mickey ears?

Man: Please, I’m a grown man. A tasteful Jack Skellington hoodie lightsaber is all I need.

Man: Leave the mouse ears to the women.

Woman: Is this why you don’t have a passport?

Man: Um, I have a Disney passport. Stamped by every margarita vendor in Epcot’s World Showcase.

Man: Citizen of the World Showcase.

[I hear this argument a lot. If they’re just another corporation, then why do people go out of their way to take a stab at them? Personally I think it’s because they have such an optimistic brand; this can piss off some more cynical people. But clearly not all, as I am a huge fan.]

Man: Disney doesn’t have employees, they have Cast Members.

Woman: So the guy shoveling shit out of the pool drain at one of their resorts is-

Man: Part of the cast.

[Almost as if they… do care about their employees?]

Man: (Laughs) Just because I was indoctrinated as a child, I ignore all the bad parts about it and yield fully to its influence over me does not mean I’m in a cult.

[I will never understand why people set their “comedic” sights on Disney when there are far more powerful forces in the world without an optimistic, happy-go-lucky image.]

[Not to mention, although we may be susceptible to feelings of joy at the parks (God forbid), we are one of the pickiest fan bases in existence. “I ignore all the bad parts about it and yield fully to its influence”? REALLY?! Need I show you the dozens of Disney fan forums commenting on every paint chip, every broken lightbulb, the tiniest flaw in an animatronic character, etc. This character probably means something else when he says “bad parts”, which are an essential, extremely vague ingredient to any anti-Disney sentiment, but I have yet to figure out exactly what these are. They border on conspiracy theory type crap. A corporate entity that has flaws? Oh my God, stop the presses.]

There is an awkward silence after the Disney Fan’s forced, unrealistic, written-by-some-pretentious-College-#%&!head statement.

Man: (Whiny) I just like it, okay? Real life is stressful, and Mickey Mouse isn’t. I like Mickey Mouse.

Woman: Ah. I see… (Emotional Music) Disney World isn’t just a theme park to you. It represents the magic of childhood… Okay… Let’s do this. We’ll do a European vacation, but before we do, we’ll drive down and we’ll spend a weekend at Disneyland. (Music stops abruptly.)

Woman: (Grabs knife) Alright, give me your arm, I’m gonna cut that tattoo out.