One of the great aspects of Pixar’s Cars franchise is how they translate real world super stars into versions that feel at home in a world where vehicles can talk. The new sequel “Cars 3” has just revealed the voices of key cast and characters. There are some newcomers and the returning favorites. Of course.

“We’re introducing some fun and really appealing characters in ‘Cars 3,’” said director Brian Fee, “so we really wanted to find the right voices to help us breathe life into them. We hit a homerun with this group; I couldn’t be happier.”

Kerry Washington (ABC’s “Scandal,” HBO’s “Confirmation”) lends her voice to Natalie Certain, a highly respected statistical analyst who knows her numbers. Book-smart and mathematically gifted, Certain may earn top marks in her ability to evaluate a racer’s stats, but she could be underestimating the importance of determination.

Nathan Fillion (ABC’s “Castle,” ABC’s “Modern Family”) voices Sterling, a brilliant businesscar who runs Rust-eze Racing Center—one of the most successful elite training facilities in the country. The always dapper Sterling comes across as unassuming and laid back, but business is business, and Sterling is driven to ensure all of his investments pay off.

Lea DeLaria (Netflix’s “Orange is the New Black”) provides the voice of Miss Fritter, a local legend at the Thunder Hollow Speedway demolition derby. Fritter’s formidable school-bus size is intimidating, but it’s her smoke stacks of doom, razor-sharp stop sign and crazy collection of her victims’ license plates that usually steers her opponents in the other direction. 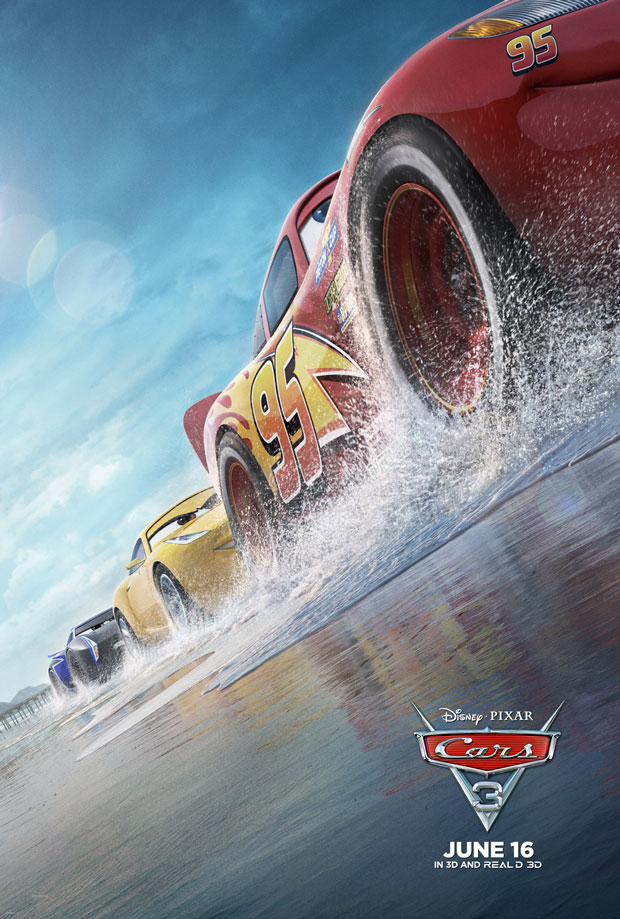 Blindsided by a new generation of blazing-fast racers, the legendary Lightning McQueen (voice of Owen Wilson) is suddenly pushed out of the sport he loves. To get back in the game, he will need the help of an eager young race technician, Cruz Ramirez (voice of Cristela Alonzo), with her own plan to win, plus inspiration from the late Fabulous Hudson Hornet and a few unexpected turns. Proving that #95 isn’t through yet will test the heart of a champion on Piston Cup Racing’s biggest stage! Directed by Brian Fee (storyboard artist “Cars,” “Cars 2”), produced by Kevin Reher (“A Bug’s Life,” “La Luna” short) and co-produced by Andrea Warren (“Lava” short), “Cars 3” cruises into theaters on June 16, 2017.