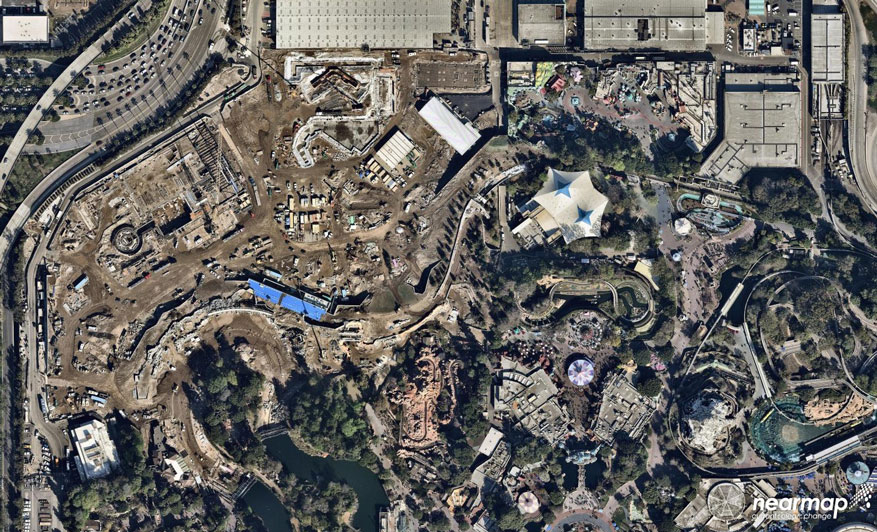 The work at Disneyland is much further along and the change is dramatic from 2014 before the construction started.

Here’s a look at construction in June of 2016 just a few weeks after clearing began in April of last year.

Finally, here’s a look from just twelve days ago:

We have also added a few lines tracing the new route for the Disneyland Railroad (green), the new reduced footprint for the Rivers of America (blue), and the new storage facility for the Fantasmic boats and barges (purple), so you can see how much is really different from before construction began in April of 2016 to February 2017.

Here’s the concept art from Disneyland showing how the new Disneyland railroad will skirt the Rivers of America via a series of tunnels and bridges.

Finally, a gallery showing Walt Disney Imagineering concept art for the new land at Disneyland. There will be two main attractions in the land – one a thrilling encounter with the First Order and the second where you’ll get a chance to pilot the legendary spaceship – the Millennium Falcon. 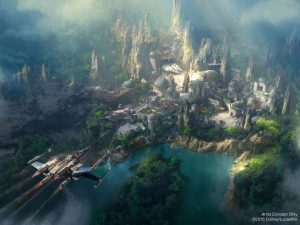 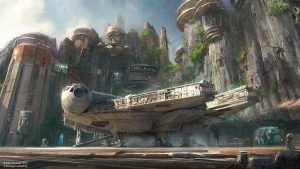 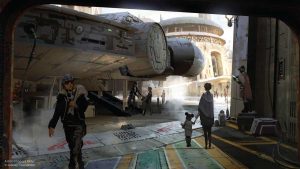 We’d like to thank Nearmap for providing these wonderful aerial photos to The Disney Blog. The detail the imagery provides is fantastic to fans like us who want to comb through every last detail of the Star Wars themed land construction projects at Disneyland.

Disneyland’s Star Wars theme land is expected to open early in 2019. Hopefully we’ll have a name for the area before that. What name do you expect Disneyland to use?