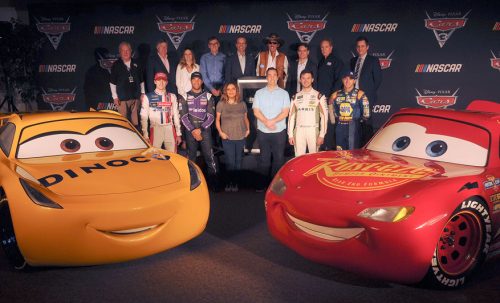 Last night NASCAR kicked off its new season with the first two races of the season. The races served as qualifiers for the weekends big Cup race – the Daytona 500. Pixar is releasing the third movie in its Cars franchise, Cars 3, on June 16th, so they’ve hitched their trailer to NASCAR for a little helpful promotion. That kicked off this weekend too.

Plans for the joint effort were shared by “Cars 3” director Brian Fee, Cristela Alonzo—the voice of the film’s elite trainer Cruz Ramirez—and NASCAR’S vice president of entertainment marketing & content development Zane Stoddard today at the Daytona International Speedway in Florida as fans gear up for the DAYTONA 500 (live Feb. 26 at 2 p.m. ET on FOX). Owen Wilson, the voice of Lightning McQueen, will serve as grand marshal for the 59th annual “Great American Race.”

“‘Cars 3’ very much pays homage to stock car racing and its rich history,” said Fee. “Our story leans into the drama, emotion and excitement NASCAR fans find at every race.”

“We’re excited to take part in delivering the ‘Cars 3’ experience to our current and next generation of fans, at-track, in school, online and across the country,” added Stoddard. “In addition to all the engaging NASCAR ‘Cars 3’ elements industry-wide, we think our fans will really enjoy the roles of several young drivers in the film.”

According to Lylle Breier, senior vice president, worldwide marketing partnerships and special events for the Walt Disney Studios, the movie inspired an expanded program with NASCAR. “This collaboration marks the biggest between the ‘Cars’ franchise and NASCAR,” said Breier. “We’re looking forward to a fun and exciting season-long program with a host of activities.”

Even Kyle Petty, member of the Legendary Petty racing clan, is excited:

I’m excited to be a part of #CARS3! My dad & mom were in the original #CARS movie. That makes it special for me. In theaters June 16! pic.twitter.com/Qt9kXuhSmX

So is Jeff Gordon:

Many of you have asked. I’m excited to announce that I will be returning as #JeffGorvette in the upcoming #Cars3! In theaters June 16, 2017. pic.twitter.com/jfcMotdlmD

Kicking off at the Daytona 500 with the premiere of a new on-air promo, the NASCAR-“Cars 3” collaboration continues throughout the entire race season.

The voices of NASCAR

The announcement included the introduction of NASCAR greats—from rookie drivers and legends to the voices behind the sport—tapped by Pixar Animation Studios to voice characters in the film.

NASCAR fans can picture themselves with Lightning McQueen and Cruz Ramirez—or at least life-sized cars designed to look like the big-screen characters. The Cruz Ramirez look-alike premiered in Daytona today, alongside #95—the Lightning McQueen car made its debut at the North American International Auto Show (NAIAS) in January. Comedian and actress Cristela Alonzo got to hang with her character look-alike at the event. “I am excited to be here as race fans get to see these two life-sized characters together for the first time,” said Alonzo.

The Lightning McQueen and Cruz Ramirez look-alike cars are slated to make appearances at select races throughout the season as part of a “Cars 3” nationwide tour. Joining them on the tour will be a look-alike of Lightning McQueen’s on-track rival, Jackson Storm.

As was previously announced, Owen Wilson, the voice of Lightning McQueen, will serve as grand marshal of the DAYTONA 500 this Sunday, Feb. 26. Wilson has provided the voice of the red car in all of the “Cars” films.

Blindsided by a new generation of blazing-fast racers, the legendary Lightning McQueen (voice of Owen Wilson) is suddenly pushed out of the sport he loves. To get back in the game, he will need the help of an eager young race technician, Cruz Ramirez (voice of Cristela Alonzo), with her own plan to win, plus inspiration from the late Fabulous Hudson Hornet and a few unexpected turns. Proving that #95 isn’t through yet will test the heart of a champion on Piston Cup Racing’s biggest stage! Directed by Brian Fee (storyboard artist “Cars,” “Cars 2“) and produced by Kevin Reher (“A Bug’s Life,” “La Luna” short), “Cars 3” cruises into theaters on June 16, 2017.