Has any recent Disney movie been more anticipated than “Beauty and the Beast”? It’s a classic story for a reason and the original animated film holds a very special place in the hearts and minds of nearly every Disney fan. But there has been some trepidation. For everyone who has been wondering if Emma Watson has the chops to sing as Belle in the new live-action adaption Disney’s “Beauty and the Beast,” a new clip from the opening song of the movie has been released.

The extended version of this is currently playing at Disney California Adventure and Disney’s Hollywood Studios. Be sure to go check it out if you get a chance.

There’s also a new featurette focused on what it takes to “Bring Beauty to Life”:

The cast and filmmakers from Disney’s live-action “Beauty and the Beast” including Emma Watson, Dan Stevens Josh Gad, Luke Evans, director Bill Condon and composer Alan Menken, gathered in the City of Light earlier today. Paris is the perfect setting for the launch of the worldwide press tour, as it is France where the story originated. 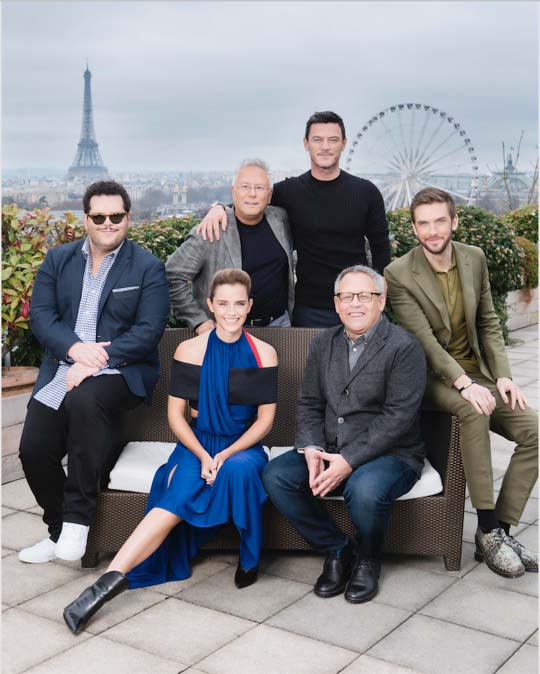 Disney’s “Beauty and the Beast” is a live-action adaptation of the studio’s animated classic which refashions the classic characters from the tale as old as time for a contemporary audience, staying true to the original music while updating the score with several new songs. “Beauty and the Beast” is the fantastic journey of Belle, a bright, beautiful and independent young woman who is taken prisoner by a beast in his castle. Despite her fears, she befriends the castle’s enchanted staff and learns to look beyond the Beast’s hideous exterior and realize the kind heart and soul of the true Prince within. The film stars: Emma Watson as Belle; Dan Stevens as the Beast; Luke Evans as Gaston, the handsome, but shallow villager who woos Belle; Oscar winner Kevin Kline as Maurice, Belle’s eccentric, but lovable father; Josh Gad as Le Fou, Gaston’s long-suffering aide-de-camp; Golden Globe nominee Ewan McGregor as Lumière, the candelabra; Oscar nominee Stanley Tucci as Cadenza, the harpsichord; Gugu Mbatha-Raw as Plumette, the feather duster; six-time Tony Award winner Audra McDonald as Madame De Garderobe, the wardrobe; Hattie Morahan as Agathe, the enchantress; Nathan Mack as Chip, the teacup; Oscar nominee Ian McKellen as Cogsworth, the mantel clock; and two-time Academy Award winner Emma Thompson as the teapot, Mrs. Potts.

Directed by Oscar winner Bill Condon based on the 1991 animated film, “Beauty and the Beast” is written by Evan Spiliotopoulos and Stephen Chbosky and Bill Condon and produced by Mandeville Films’ Academy Award nominees David Hoberman and Todd Lieberman, with Emmy winner Jeffrey Silver, Thomas Schumacher and Oscar nominee Don Hahn serving as executive producers. Eight-time Oscar-winning composer Alan Menken, who won two Academy Awards (Best Original Score and Best Song) for the animated film, provides the score, which includes new recordings of the original songs written by Menken and Howard Ashman, as well as three new songs written by Menken and three-time Oscar winner Tim Rice. “Beauty and the Beast” will be released in U.S. theaters on March 17, 2017.