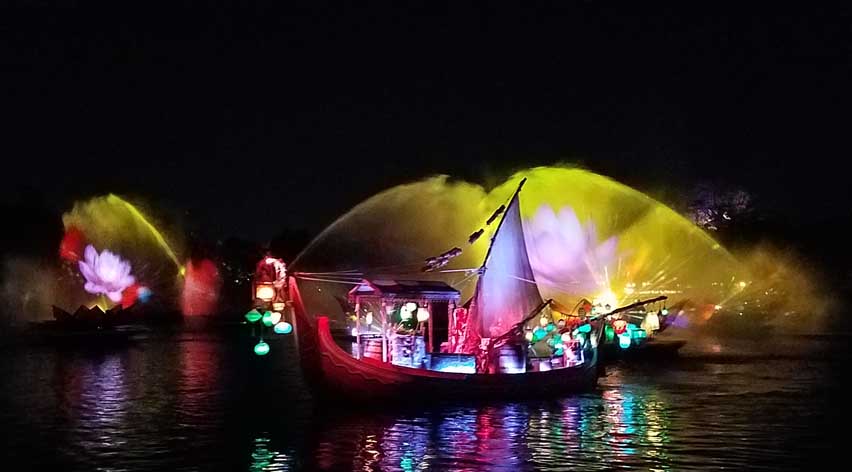 We were lucky to witness one of the first previews of the ‘newest’ night time show to arrive at Walt Disney World – “Rivers of Light.” The water, light, and musical show takes guests of Disney’s Animal Kingdom through timeless beauty and animal folklore starting officially this Friday.

Originally scheduled to open 10 months ago, the show went through many technically troubleshooting issues, then over the last few months, the show itself had some significant changes shortening it from an 18 minute show to 15 minutes.

As with many things at Disney’s Animal Kingdom, Rivers of Light doesn’t fit neatly into a category of entertainment you might find at other Disney parks. There are only a few performers, most of the show is based on floats that navigate based on pre-programmed GPS coordinates, and there are no Disney characters. There are water screens with digital projections, as we’ve seen with “Fantastmic!” for years, but Rivers of Light takes that technology to an exciting new place.

Instead, it’s a the modern equivalent of tribal storytelling. As guests we’re gathered around the campfire as Disney conjures a beautiful story of animal tales and the connected-ness of all things in the largest story of all – life.

One of the strengths of Rivers of Light is that there is a lot going on. So no mater where you’re sitting in the stadium, you’ll have a view of something. There are elements of the show both on the lagoon and the areas surrounding it. Taking in the whole show will require multiple visits.

I did have a few minor complaints.

What I loved about the show was the music, I’m still humming the central song of the show, which rivals “We Go On” from the Millennial Celebration CD (still played at the end of Illuminations at EPCOT). The digital projections were a lot clearer than in “Jungle Book: Alive With Magic,” but the giant water screen in the back was still only really at 95%, meaning some of the image was lost. I also can’t say enough about how beautiful the Lotus Blossom floats are. They’re central players in the show for good reason. 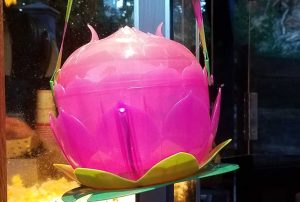 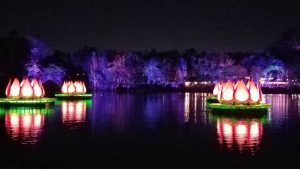 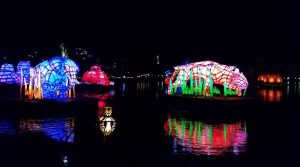 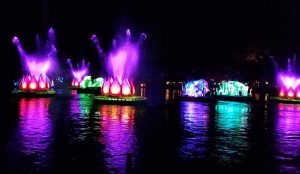 The fountains are beautiful 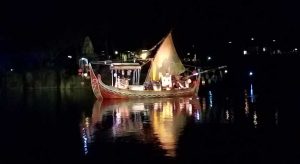 Wish I saw more of the performers, but they were great 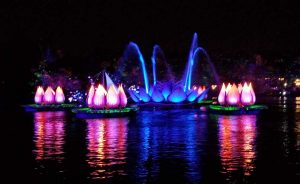 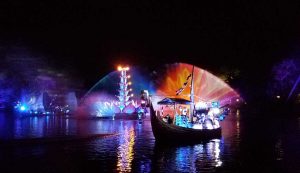 Our recommendation is to secure a Fastpass, if at all possible, then line up to be among the first to get into the theater. There are no awful seats, but you want to be closer to the water rather than far away (there is no splash zone – as the helpful cast member told me) and closer to the bridge between Asia and Dinoland, rather than at the other end of the seating.

Once your party has their seats, send one or two members out to hunt for snacks and refreshments. It did require some hunting on my part, I expect there will be more options once they go to two shows a night. Then enjoy the evening as Disney’s Animal Kingdom transforms from dusk to dark. The pre-show starts about 15 minutes ahead of the main event. Keep your eyes, and ears, focused on the banks of trees across the lake from the main seats.

“Rivers of Light” is Disney’s first foray into using this technology at its domestic parks. I expect them to continue to innovate and develop new versions of the show that will amazing and entertain. The show as it stands now may not be everyone’s cup of tea, but it certainly is mine. I’ll be back to see it this Friday when it officially premieres and again many times after that.