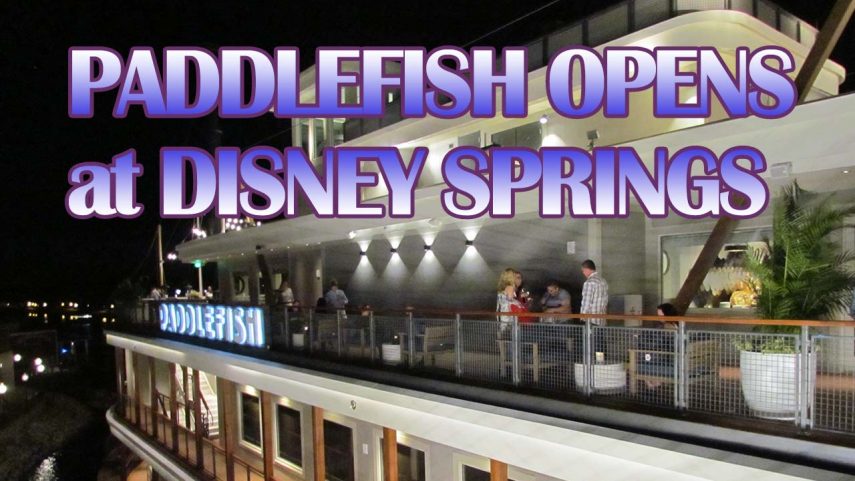 We were lucky enough to be invited to visit Paddlefish on their grand opening night in Disney Springs. It was a party setting with samples of the restaurant’s cuisine spread out around the each dining room. While we didn’t experience a traditional service, I can safely say the quality and preparation of the food and drinks ranks near the top of any restaurant at Walt Disney World.

As the party wound down, I was pleased to find Chef Mark Boar talking with guests and was able to get him on camera to discuss the new restaurant.

We talked about the need to update the old Fulton’s Crab House look to match the more modern appeal of Disney Springs, his vision for the new modern seafood centric menu, the new featured crab boil in the first floor bar area, and what you can expect on your next visit.

Chef Mark Boor took over Fulton’s Crab House five years ago, but he started his culinary career twenty years ago. He served two tours for the Navy and U.S. Coast Guard and learned everything about cooking he could on those travels and adventures.

Originally from the midwest, Boor has worked in restaurants across the country—from the four-diamond Omni Severin Hotel in Indianapolis, to the Columbia Restaurant on St. Armands Circle in Sarasota, to Trio Bistro in Cincinnati. No matter where he was, Boor’s passion has always been preparing unique, flavorful seafood dishes. His favorite thing about cooking with fish is that it can be manipulated so many different ways with texture and accompaniment.

As you can tell, Chef Boor is committed is to turning Paddlefish into Central Florida’s best seafood house. He’s been crafting a new and improved menu for Paddlefish for over two years now and has also been helping design the restaurant’s new kitchen to accommodate it.

From my experience on opening night it Chef Boor succeeded beyond my expectations. We’ll be back in a few days with a more in depth look at the food we experienced and the new interior of Paddlefish.