The Future of Star Tours With anticipation for Disney’s Star Wars Themed Land (SWL) additions (currently under construction in both the original Disneyland and Disney World) growing by the day, many have wondered: what will become of Disneyland’s Star Tours? Construction on SWL at Disney World’s Hollywood Studios is close enough in proximity to their version of Star Tours that the ride should be able to coexist with the new attractions, but Disneyland’s SWL is being built in its northwest region; nowhere near Star Tours on the east side in Tomorrowland.

Disneyland’s Tomorrowland is also currently serving as a sort of temporary Star Wars Land with its lackluster Season of the Force event, which consists mostly of cheap Star Wars banners, an exhibit of prop replicas, a clipshow of the first six movies, and the admittedly awesome Hyperspace Mountain overlay. Even as a huge Star Wars fan, I find the lineup as a whole disappointing.

Star Wars aside, let’s look at the remaining rides in Tomorrowland: The Astro Orbiter, Autopia, and Buzz Lightyear Astro Blasters. You could argue the Submarines and the Matterhorn should be included as well, but they’ve always been in sort of a gray area and don’t exactly stay true to the theme of Tomorrowland. When Walt dedicated the area, he described it as

“A vista into a world of wondrous ideas, signifying Man’s achievements… A step into the future, with predictions of constructed things to come. Tomorrow offers new frontiers in science, adventure and ideals. The Atomic Age, the challenge of Outer Space and the hope for a peaceful, unified world.”

Autopia, charming as it is, is a relic of the past and hasn’t represented these ideas in quite some time; in fact, its counterparts in Hong Kong and Tokyo have recently been demolished. Personally, I wouldn’t mind seeing it moved over to Cars Land in California Adventure, just… please don’t give the cars faces. But that’s beside the point. The company has specifically said that they want to keep Tomorrowland from becoming “Yesterdayland”, and when the only operating attractions intended to represent Walt’s original vision are the Astro Orbiter, Autopia, and Buzz Lightyear… I don’t think the area comes close to living up to its name. And yeah, nothing says “peaceful, unified world” like a literal war in the stars. Where should Disney go from here? Personally, I think the addition of Star Wars Land will provide a sufficient presence of the franchise in Disneyland and Star Tours won’t be necessary. Let Star Tours be exclusive to the three other parks that have it, and give our Tomorrowland some SPACE to return to its roots. Hah… sorry.

And do what with it, exactly? Well, the attraction that Star Tours originally replaced was Adventure Thru Inner Space, which gave riders the experience of being shrunk down to a size smaller than that of an atom. This concept epitomizes everything about Walt’s original vision for Tomorrowland, and an update of the attraction with new technology would be a fantastic place to start reworking the area.

Former attractions are a source of great interest to both longtime fans who remember seeing them, and younger ones who never had the chance to. Disney seems to be recognizing this more recently with the revival of the Main Street Electrical Parade, and more importantly, the rumored remake of the short-lived Nature’s Wonderland (via the Disneyland Railroad). 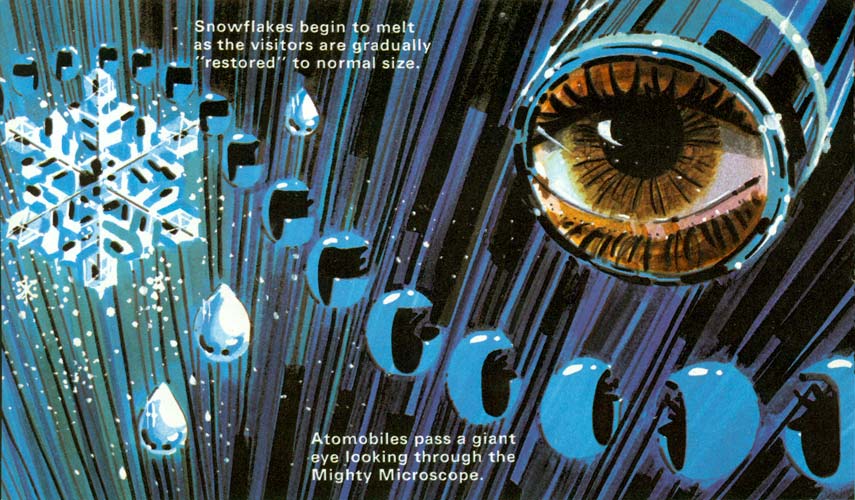 I’m also worried Disney will be tempted to give Star Tours a cheap reskin, as it is an easily reprogrammable simulator ride. Now, say, a Body Wars remake for instance wouldn’t be so bad, but if Disney goes the reskin route I think we’d be more likely to get something similar to Hong Kong’s new Iron Man Experience. Another generic simulator based on a hot property that more than likely won’t mesh well with Tomorrowland’s theming.

Who knows — maybe Disney’s Imagineers will completely surprise us and come up with a new property or ride entirely. Maybe they’ll leave Star Tours as it is. It’s not the worst fit for Tomorrowland, it just really isn’t the best, and that could be said about the general condition of Disneyland’s version of the area at the moment. But that doesn’t mean there isn’t a great, big beautiful tomorrow in store.

What would you like to see Disneyland do with the Star Tours attraction?