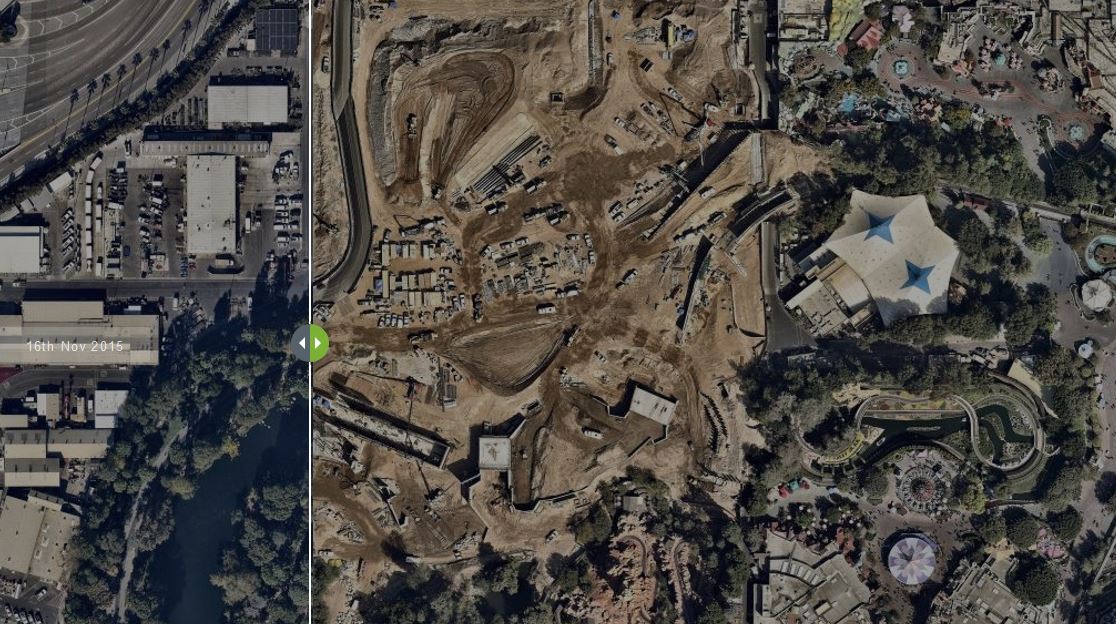 It’s really hard to get a sense of scale for the Star Wars themed land construction at Disneyland in Anaheim. 14-acres takes up a huge portion of the former backstage area and some of what used to be Frontierland. Thanks to some new aerial photography from Nearmap, we have a look at how dramatic the changes have been right up through September 2016.

Here’s a new slide that lets you toggle between before construction began and September 2016.

Gone are the warehouses and offices that previously occupied the land, already established are some of the early forms that will help Star Wars land start to go vertical.

If you look near the new outline of the rivers of America, you can see the new building Disneyland is constructing to house Fantasmic! related boats and props.

I also like this look with a slide show that runs from November 2015 through September 2016.

So far there’s no opening date announced for the Star Wars themed land, but we do know that Disney wants to reopen the Disneyland Railroad and Rivers of America by fall of 2017.

Hopefully Nearmap will continue to turn their eagle eye toward Anaheim and keep us updated through completion of the project. Are you looking forward to having more Star Wars at Disneyland?

Update 11/19: Here’s a similar slider with an aerial photo of Disney’s Hollywood Studios Toy Story Land and Star Wars themed Land from September 2016. Toy Story Land is the square plot at the top where construction has already begun. Since the time this photo was taken the first lift hill for the Slinky Dog coaster has gone vertical. They’re still clearing ground for Star Wars themed land, and the work to shift the main entrance road to the east and expand parking continues.