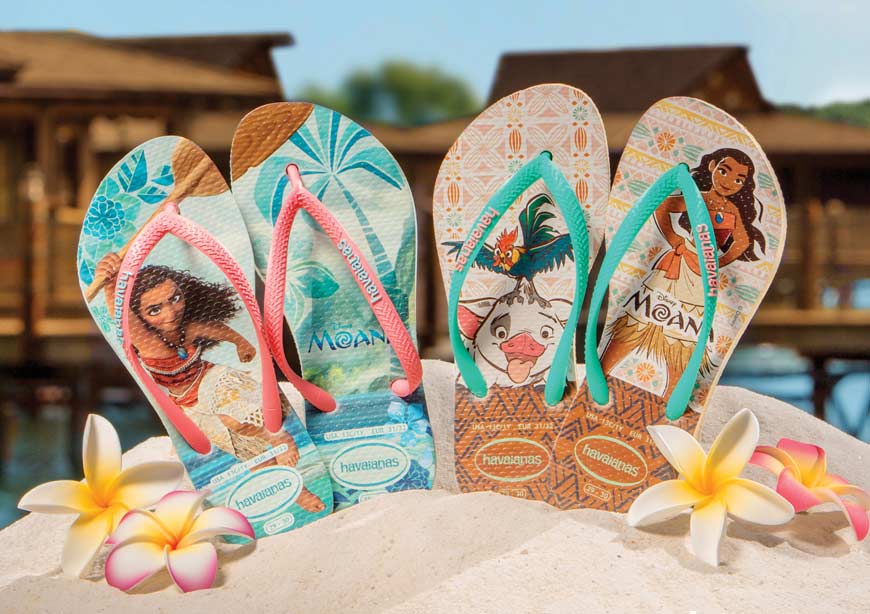 Did you know that Disneyland and Walt Disney World had an official flip flop? That’s right, Havaianas, known for energetic and vibrant Brazilian designs in footwear, have a strategic alliance with the Disney company that includes stores at Disney Springs and a number of Disney themed styles in their stores.

They just revealed a new pair of flip flops that were designed in combination with Walt Disney Animation Studios’ upcoming comedy adventure “Moana,” which hits theaters November 23, 2016. “Moana” will be the brand’s first collaboration in conjunction with the release of a film.

“We are inspired by the ingenuity of each and every Disney film, and we look forward to reaching a new generation of fans through this collaboration,” said Marcio Moura, Havaianas’ USA President. “The opportunity is a natural fit, not only because of our existing Disney Alliance partnership, but also because the vibrant and tropical setting of Moana is synonymous with the spirit of Havaianas.”

As a World Premiere sponsor of “Moana,” Havaianas will have a brand presence at the red-carpet premiere and party in Hollywood on Nov. 14, 2016. Also keep an eye on their website for a sweepstakes to co-promote the film and the Moana product in-stores.