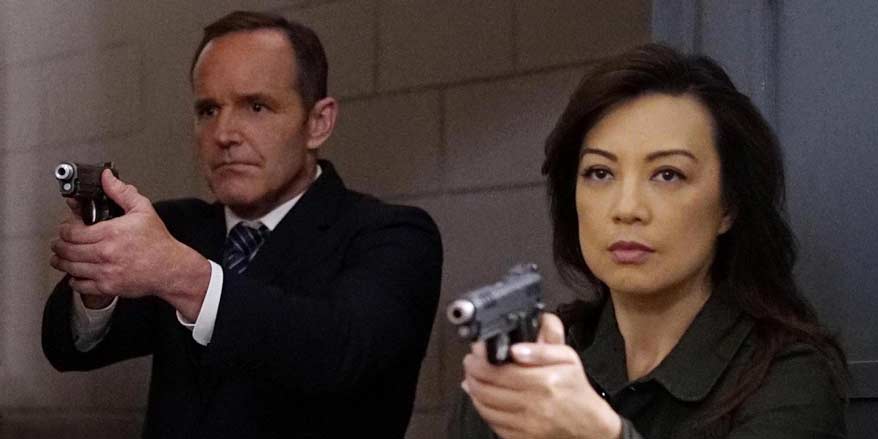 Then: Lucy and her husband are in an abandoned shed looking for the Darkhold book. They find it and open it up. At first the pages are empty but soon words appear on them. Lucy is able to read them in English but they appear German to Joe because German is his first language.

Now: Coulson and Mack are at the hospital where Joe has just woken up from a coma (because his ghost wife infected him). He sees the agents as demons and freaks out but does tell them that the book is in the aforementioned shed. At the shed, Lucy has uncovered the book again but when she touches it, the text appears in fragments.

Back on the Zepher, Coulson decides to go back to the prison to pick up Robbie’s uncle who may be the only one who can help them find the book.

Back at headquarters, Simmons is still not happy that Fitz didn’t tell her about the LMD and worries about the polygraph test she has to take later that day.

Coulson and May are in the Warden’s office but May can tell something is off. Suddenly the Warden pulls his gun and starts shooting at the agents calling them demons. Seems Lucy got there first.

It’s not just the Warden but the guards as well and Lucy has brought her two ghost friends with her. Mack, Daisy, Robbie and a couple other SHIELD agents head down to help with the antidote. After meeting up with Coulson and May they go looking for Eli but run into a hall full of new Watchdog recruits that Lucy sets free.

Elsewhere in the prison, Mack and Robbie encounter Lucy’s ghost buddies. Robbie is able to take them out but Mack becomes infected. Fortunately, he realizes it quickly and gives himself the antidote.

Coulson, May, and Daisy are being chased by the Watchdogs until Daisy locks herself in a room with them blocking Coulson and May from helping. 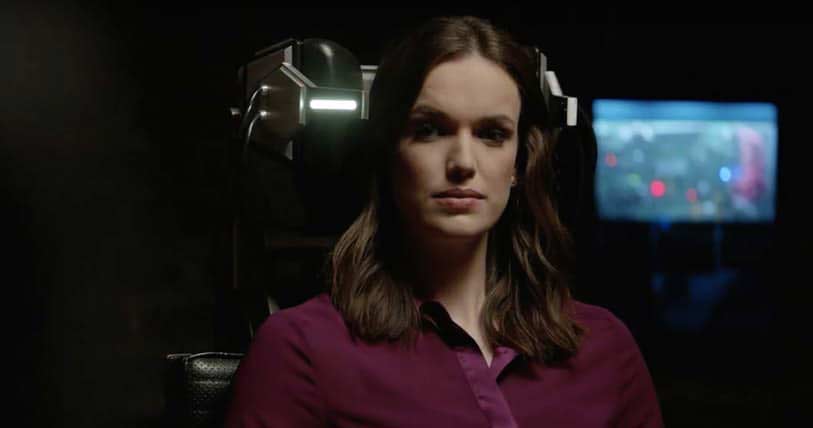 Back at SHIELD, Simmons’ polygraph test is interrupted when Director Mace asks for her help in a live debate he’s about to have defending the fact that they are protecting Inhumans. Mace puts an ear piece on an Simmons uses a mic to respond to Nadeer’s questions. The debate goes well until the raid on the prison is brought up, something Mace knows nothing about. He recovers and the debate continues until Nadeer wonders aloud if he is the right person to be director of SHIELD. He then reveals on live TV that he is, in fact, an Inhuman which makes him the right person.

The team heads, empty handed, back to the base. Daisy and May have a heart to heart where May reminds her that Coulson will never stop caring about her. Simmons heads to the director’s office and implies that she has figured out that he is not the hero he claims to be which causes Mace to cease her routine polygraph tests.

The final scene is of Mace and Nadeer. She has video footage from the prison showing SHIELD working with Ghost Rider who is a known murderer. Why she isn’t concerned with the fact that Coulson, an agent who’s supposed to be dead, is in the video, I’m not sure. But she plans on using the footage to blackmail SHIELD.

(Editors Note: Chris apologizes for the late recap, but he was unavailable to watch the show for a recap until now.)