So you’re saying there’s a chance Ron Howard? Actually, yes. Ron Howard, who directed the beloved-by-many film “Willow” is now on record twice saying that he’d be interested in doing a story about a grown up Willow. Now that Disney owns Lucasfilm, more Willow could actually be possible.

Willow, of course, was played by Warwick Davis, whom we first met as the ewok Wicket in “Star Wars: Return of the Jedi.” In “Willow,” Davis played the title character who was a young farmer who set out on an impossible journey and along the way discovered his own amazing powers of magic.

In a new interview with Nerdist, Howard remembers his time working in the film fondly. He mentions that Disney owning Lucasfilm is a good thing and that Warwick Davis is interested too. Then he mentioned if not a movie, he’d like to watch a Willow TV show.

This idea also came up 10 months ago with a quote that made the hearts of all fans of Willow skip a beat was made during a Reddit “Ask Me Anything” session. 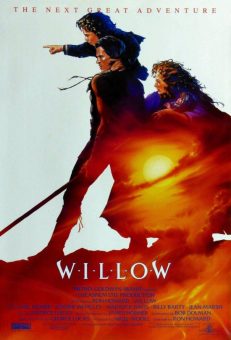 “Right now, the Lucasfilm team led by Kathleen Kennedy, who is an old dear friend, is entirely myopically focused on the Star Wars universe as you can imagine. So I think the immediate possibility of another Willow movie is probably not on the front burner. But Warwick Davis is such a cool guy, and he’s continued to evolve as a talent … man, he’s Willow! And a grown-up Willow could be kind of cool, so, I’d say never say never.”

Ron Howard, has ties to Disney including directing the movie “Splash,” which is notable for being the first film released under Disney’s Touchstone label. (He also produced Disney’s “Alamo,” again under the Touchstone label.) I think that the acquisition of Lucasfilm provides the perfect opportunity for Disney and Ron Howard to join forces again.

While there may be interest in a sequel, Howard doesn’t see much of a chance of Lucasfilm wanting to do anything else during its focus on Star Wars. I don’t buy that. Lucasfilm has already said they’re working on a new Indiana Jones film, certainly there’s space on the calendar to return to the world of Willow again between those Indiana Jones movies.

That said, Willow was not exactly a giant at the box office (see what I did there?). It only earned $57.3 million on a $35 million budget. However, since then, it has developed a bit of a cult status among fans (including moi). So it will be up to us, the fans, to convince Lucasfilm there’s an appetite for more Willow. It sounds like some of the key players are interested, now let’s make happen.