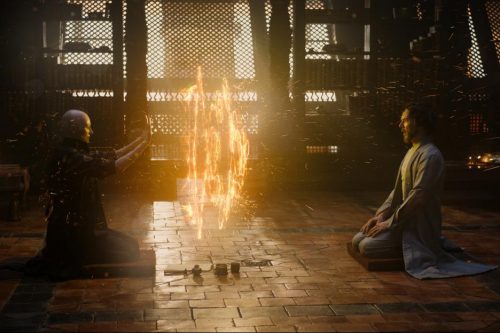 You can do magic
You can have anything that you desire
Magic, and you know
You’re the one who can put out the fire.
– America (the band)

There has been no shortage of superhero films over the past few years (decades?). In addition, movies made of mystic arts and magic have also seen quite the boon. In short, it is a fantastic time to be alive for fans of science fiction and fantasy in the cinema, and with the theatrical release of Marvel’s Doctor Strange on November 4, it would appear that the streak will continue.

Doctor Strange features Benedict Cumberbatch (Dr. Stephen Strange), Chiwetel Ejiofor (Mordo), Tilda Swinton (The Ancient One), Benedict Wong (Wong), Mads Mikkelsen (Kaecilius), and Rachel McAdams (Christine Palmer). The film is directed by Scott Derrickson and produced by Marvel’s Kevin Feige. Yes, it is an origin story, which, thanks to countless reboots of hero franchises, can often earn a collective groan from the internets, but for many moviegoers the backstory of Dr. Stephen Strange is a needed one, and, fortunately, Marvel presents it darn close to perfection.

What does that mean? It means that Cumberbatch is brilliant in the role (as is the entire cast), and that Marvel does not hold back in exploring the realms and realities of the Doctor Strange story—a story so bold and different that it expands the Marvel Cinematic Universe (MCU) beyond its established boundaries of space and time, such as they are, and bends our collective understanding like so many Beatles-inspired brownies.

That is, Doctor Strange provides an experience as trippy as the era that created it (1963), but with the added benefit of viewers still being able to drive home in a responsible fashion. I attended the Doctor Strange press conference, and the psychedelic element (called the “Magical Mystery Tour” by Derrickson) received a good share of the questions. Here are some of the answers about the thinking and technology behind it from Director Scott Derrickson [edited for length]:

“. . . so, when I came in to meet on Doctor Strange, you know, my approach was let’s make this as weird in the MCU as the comic was in the comic book world in the Sixties, and that’s what we tried to do. . . I felt like that my goal was for every set piece in the movie to be the weirdest set piece in any other movie, you know. But each one of them would be uniquely odd and unusual and refreshing. And that comes out of movie fandom more than anything else, because that’s what I want to see. I want to see event movies that use visual effects sequences for more than just mass destruction, but get more creative with them and find new ways to do them and give me as an audience member some kind of visceral experience that’s unique, because the movies that do that are memorable and change the way you feel about cinema in general.”

On joining the MCU

Tilda Swinton: “I keep saying that it’s a bit like being invited to join the circus, you know? You get invited to be the bearded lady or the painted gentleman or something and you may have a chance in the future to play with a clown or learn a bit of trapeze or work with the ponies with the plumes. The reason that feels like a correct way to describe it is that everybody’s so psyched. I mean, even the Sorcerer Supreme, Kevin Feige’s just the super fan of all super fans and he’s the master of the big top and it just feels such a lucky break for everybody who’s working in that circus top, don’t you think?”

Benedict Wong: “Yeah, absolutely. I mean, I’m so thrilled to be a part of this. I mean, growing us a kid I was always collecting Marvel comics and especially Spider-Man comics, and it’s just lovely to see my investment as a child has the fruition in my adult life . . .”

Rachel McAdams: “Well, I mean, I was just thrilled, because of this incredible track record, because of that you know so much care and attention and consideration is going to go into the film before you’ve even begun. And that you’re going to get to work with the best of the best in the world, what they do, so it’s just this like treasure trove of talent, and you know, so I just couldn’t wait to dive into that.” 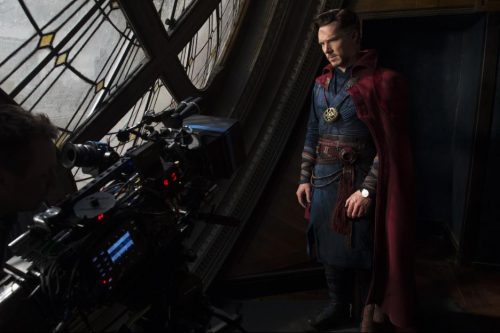 Benedict Cumberbatch upon seeing himself dressed as Doctor Strange for the first time:

“I was sort of giddy like a child at Halloween. It was the first moment, really, properly, and Alex spotted it, our brilliant designer who’s done a few of these films, and she went, “Oh, you’re having the superhero moment, aren’t you?” I went, “Yeah, I think I am.” It really was the penny drop moment for me. You know, this film had lots of alluring qualities, lots of things that made me really want to go to it and this character in particular, and in particular what Scott and Kevin were pitching to me is his trajectory, his origin story and where he was going to lie within the Marvel Cinematic Universe. But the journey he goes on was sort of supremely important to me, and the qualities of drama but also great humor amongst that profundity and that oddness and unique weirdness and newness that we were going to bring visually. So I’d kind of put the hero thing on the back-burner, so when I first had that moment, it really was quite giddy. I just did stand up just giggling.”

Doctor Strange is more than your classic “East meets West” story, in that it is more like East picks up West, the latter kicks in for gas, and together they go on a wacky adventure, solving mysteries, fighting crimes, and doing how buddies do. Hilarity ensues.

What makes the film work so well, like Ant-Man before it, is that Doctor Strange introduces a mainstream audience to a lesser known Marvel character and sets their own hero story in motion, while also arranging the bigger connection within the MCU with remarkable deftness. There’s nothing strange about that.

Doctor Strange is rated PG-13, and there are a number of scenes that kids may find disturbing, from a car accident (no casualties) to all kinds of fights, both magical and fisticuffs—the former leading to some fairly intense consequences. Also, the bad guy is big, scary, and does the things that bad guys are prone to do.