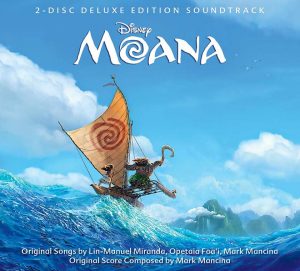 Disney’s “Moana” is set in the Polynesian seas of the south Pacific, so the soundtrack is expected to feature a lot of tiki and Hawaiian inspired music. That has fans of that music, like me, excited. We’ll get our first listen to the soundtrack when it is released on November 18th. If you want to make sure you’re among the first to hear the music, the Moana original motion picture soundtrack, features seven original songs and a full original score, plus two reprises as well as two end-credit versions of songs from the film, is now available to pre-order.

The diverse and dynamic team behind the film’s inspired music includes Tony- and Grammy-winning songwriter/composer Lin-Manuel Miranda, who counts among his credits Broadway’s Pulitzer Prize-winning and multiple Tony-winning “Hamilton” and the Tony-winning “In the Heights.” The creative team also includes three-time Grammy-winning composer Mark Mancina (“Speed,” “Tarzan” and the Oscar-winning “Training Day”) and Opetaia Foa‘i, the founder and lead singer of Te Vaka, a winner of numerous world music awards.

Written by Miranda and performed by Dwayne Johnson in the film, “You’re Welcome” showcases the colorful personality of Maui. Here’s a teaser of the song released yesterday:

Hollywood Records artist Jordan Fisher teams up with Miranda for the end-credit version of “You’re Welcome.” After a breakout performance in the Emmy Award-winning production of Grease: Live, Jordan Fisher released his debut single, “All About Us,” which soared to the top of the Billboard Pop charts. Fisher, who recently opened for Alicia Keys at this year’s Apple Music Festival, has joined the Broadway cast of “Hamilton,” and is set to release his full-length album in 2017.

“How Far I’ll Go” is Moana’s song written by Miranda and is performed in the film by newcomer Auli‘i Cravalho. The end-credit version of the song is performed by Canadian singer/songwriter and Def Jam recording artist Alessia Cara. Her gold-certified album Know-It-All includes the multi-platinum singles “Here” and “Wild Things,” plus the critically-acclaimed single “Scars to Your Beautiful.” Cara is a Juno Award winner for Breakthrough Artist of the Year and is a 2016 America Music Award nominee for New Artist of the Year. She recently completed a tour with Coldplay.

For centuries, the greatest sailors in the world masterfully navigated the vast Pacific, discovering the many islands of Oceania. But then, 3,000 years ago, their voyages stopped for a millennium – and no one knows exactly why. From Walt Disney Animation Studios comes “Moana,” a sweeping, CG-animated feature film about an adventurous teenager who is inspired to leave the safety and security of her island on a daring journey to save her people. Inexplicably drawn to the ocean, Moana (voice of Auliʻi Cravalho) convinces the mighty demigod Maui (voice of Dwayne Johnson) to join her mission, and he reluctantly helps her become a wayfinder like her ancestors who sailed before her. Together, they voyage across the open ocean on an action-packed adventure, encountering enormous monsters and impossible odds, and along the way, Moana fulfills her quest and discovers the one thing she’s always sought: her own identity.

The Moana original motion picture soundtrack features 14 tracks and will be available wherever music is sold and streamed on Nov. 18, 2016. Walt Disney Animation Studios’ “Moana” opens in U.S. theaters on Nov. 23, 2016.