Yesterday’s Marvel panel at San Diego Comc-Con was so big and content filled that I felt it needed its own post. So here we go.

Kevin Feige opened up the panel by saying they wouldn’t have come here if they didn’t have a lot to share, and boy did they share a lot. First Marvel Studios got a new logo, which means nearly every upcoming Marvel movie got a new title treatment.

First up, Black Panther now has a cast list, most of whom were at the panel. Chadwick Boseman, of course, is Black Panther. Michael B. Jordan will play Erik Killmonger, Lupita Nyong’o will play Nakia; and Danai Gurira is Okoye. They also revealed the new logo for the movie.

Thor: Ragnarok didn’t have much to show because the movie is still in production but the Hulk’s armor is on display which is awesome. They also released a new logo for the movie with a retro feel. 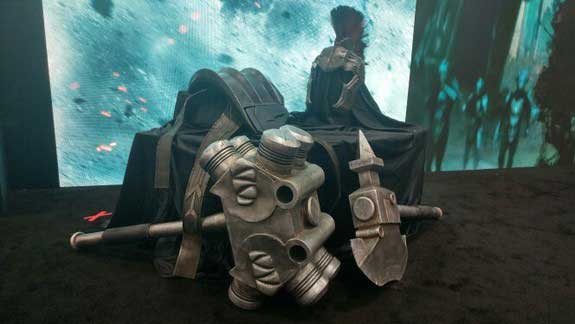 The audience got to see some footage of Spider-Man: Homecoming but for us mere mortals not in Hall H, we do get a concept image from the movie showing Spider-Man fighting the Vulture, who looks to have some Helicarrier-inspired wings.

The cast of Doctor Strange was on hand to reveal a new trailer.

Captain Marvel now, officially, has a leading lady: Brie Larson and a logo. The Oscar winning actor will play Carol Danvers and have the honor of leading the first female super hero solo movie from Marvel.

But the biggest news came from the Guardians of the Galaxy Vol. 2 segment. Along with a new, also retro-looking, logo, we also got confirmation that (spoilers ahead) Kurt Russell is playing Ego, the living planet and Starlord’s dad.

However, that’s not the big news!

Guardians of the Galaxy – Mission: Breakout! is coming to DCA.

The ride will feature the entire cast reprising their roles, including Benecio del Toro as the Collector. I am conflicted on what I think about this. I love Tower of Terror…but I also love Guardians of the Galaxy. Let’s be honest, The Twilight Zone really doesn’t have the cultural impact it used to.

What do you think of what’s coming from Marvel?