What I learned from Zootopia’s bonus features

Like many other Disney fans this week, I spent some time poring over the Zootopia bonus features. My kids and I love DVD extras—the behind the scenes look at movie-making, the stories behind the story that makes it to the screen. It’s always fascinating to watch the creative process of others, and for Zootopia especially, that was the focus of the bonus material. Very transparently, the film’s creators took us along the entire journey—from the inception of its first ideas through the birth of the final product—and through it encouraged me greatly in my own creative pursuits. 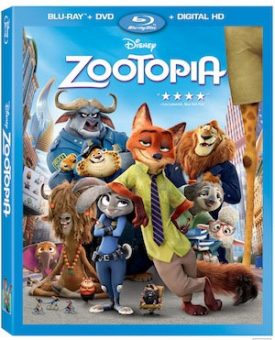 What struck me the most in the extra content was just how many changes Zootopia went through in its story development. In the segment entitled “The Origin of An Animal Tale” we see just how different the original plot of the movie (and working title) was from its end result. “I don’t think everyone really understands what goes into telling these stories,” director Byron Howard tells us. “Sometimes the movie you start out with is not the movie you wind up with.” For anyone who’s watched these extras, you know exactly what he’s talking about.

The Zootopia pitch was originally six unique story ideas. From these pitches the creative team settled on a predator-prey storyline and got to work creating a feature length film told from the perspective of Nick Wilde, a clever yet cynical fox. This version of Zootopia involved the predator animals wearing “tame collars” (much like dog shock collars) to make the prey animals that co-exist with them feel safe. Nick realizes the collars for the oppression they were, and struggles to open everyone else’s eyes to that truth. Very heavy stuff.

The creative team went a long way developing this story—years into the process—before they realized something wasn’t working. The story was becoming very negative and there wasn’t much hope for an audience to cling to. Because it was told through the eyes of a cynical character, the audience had a cynical perspective. For a children’s movie—this posed a problem.

They took a step back and spent another year troubleshooting what would make a better story. Once they started exploring retelling story through Judy Hopps’ much more optimistic, hopeful point-of-view, pieces started falling into place. This caused so many changes and so much work to basically redo everything they’d worked on up this point now years into the movie-making process. But—and here’s my takeaway—it’s worth it.

“In all the movies I’ve worked on, I’ve never seen a movie make this big a shift this late in the game,” producer Clark Spencer says, “But, for us, it’s about telling the best story.”

This practice has been followed by Disney since the early days. I remember reading about how many budgets and deadlines were blown before Snow White and the Seven Dwarfs made it to the big screen. It was never about writing the fastest story.

As someone who writes stories as a career, I’m so glad Spencer says this. For me, this was like receiving a permission from a teacher to redo a sub-par assignment, due date be darned because quality is more important than speed. So often I think that creative people sacrifice the best work for their best work now because of time constraints, and as a result we all miss out on great art. I’m very grateful that this isn’t the example that Disney sets for its audiences (and for dreamers, too).

Here’s to writing the best stories.