The latest from Marvel’s Thor: Ragnarok

A lot of new updates about the next Thor movie, Thor: Ragnarok, have been released recently.

For one, Marvel has announced the new cast. Cate Blanchett will play the villainous Hela and Jeff Goldblum will play the eccentric Grandmaster (because ‘eccentric’ and ‘Jeff Goldblum’ go well together). Tessa Thomson (a great comic book name already) will play Valkyrie and Karl Urban will play Skurge.

Rounding out the new cast is, of course, Mark Ruffalo, reprising his role as Bruce Banner, which leads to the second big update-

Since the Hulk’s disappearance in Avengers: Age of Ultron and the announcement that he’ll be showing up in this movie, many fans have been wondering if we are going to see the Planet Hulk story from the comics on the big screen. 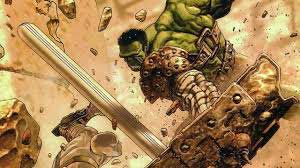 While the story details are still being kept under wraps, the pieces seem to be pointing to at least having some elements of the Planet Hulk story.

This is a Thor movie, not a Hulk movie, so clearly the plot will be different but having the Hulk in space and having the Grandmaster (who likes games) involved seems to point to us seeing at least the gladiator scenes from Planet Hulk (which also hopefully means we’ll be seeing the Hulk sport that awesome armor from the comics).

Thor: Ragnarok is currently slated to hit theaters July 28, 2017. Are you looking forward to seeing Thor and Hulk team up next year?