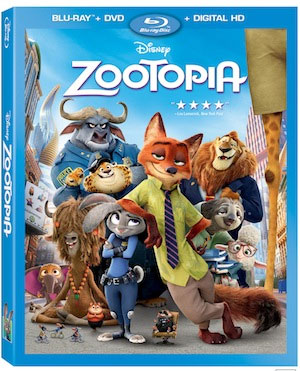 A big congratulations to the team at Walt Disney Animation Studios for reaching a major milestone with Zootopia. It just surpassed $1 Billion at the global box office, just days before it comes out on Blu-Ray/DVD too. In its 17th weekend in release it has grossed $337.2 Million domestically and $662.8 Million internationally.

Zootopia is only the fourth animated feature ever to pass the billion dollar mark. Disney also owns two of the other three titles, which are Frozen ($1.28 billion), Illumination Entertainment’s Minions ($1.159 billion), and Pixar’s Toy Story 3 ($1.063 billion).

This also keeps Zootopia in second place overall for the year behind Marvel’s Captain America: Civil War ($1.131 Billion) and ahead of The Jungle Book ($895.1 Million).

Zootopia will be available on DVD / Blu-Ray and Digital HD on Tuesday June 7th. Pre-order it today and save up to 40%, your purchase will support The Disney Blog.

In the meantime check out this special look at some of the Hidden Mickey’s in the movie:

Other bonus features include candid conversations with filmmakers and artists behind Zootopia, an alternate opening, never-before-seen characters and deleted scenes, and a sneak peek at some of the hidden Easter Eggs that make reference to Disney Animation’s most beloved films and characters.

What was your favorite moment in Disney’s Zootopia? Will you be buying it to watch at home?