I’m just going to jump right to my proposition. Disney needs to build a theme park somewhere else in the United States very soon. Somewhere like outside of Washington D.C. (driving distance from most of the North East), St. Louis or eastern Texas (reachable by the largest populations in the midwest). They should not build a discount park full of lightly themed off-the-shelf rides like they planned with Disney’s America (above). But, build something that really represents the best Imagineers can do given a blank slate, decent budget, and ample space.

I propose this because there’s all this talk of a fifth gate being needed at Walt Disney World. But Walt Disney World doesn’t need a fifth gate. It can just keep expanding the gates it has until they become two day parks. A park where you can go for two full days and still not see everything there is to do. The Magic Kingdom is almost there and EPCOT certainly has the expansion pads it would take to grow to two days worth of attractions. That would provide a whole week of entertainment for any guest.

But here’s where it gets interesting. Even with 2 two-day parks (MK, EPCOT) and 2 one day parks (DAK, DHS), there is a theoretical limit to the number of guests Walt Disney World can hold and not overwhelm its infrastructure and start providing diminished returns. That number is probably not that much higher than what the parks serve today. Probably 5 or 10 million more guests a year than visit a year today. This is the reality and its part of the reason Walt Disney World is becoming more of a luxury destination than a family vacation destination and that trend will probably continue (barring a severe economic shift).

There’s also the question of whether Disney could convince families to stay an extra night or two at Disney World when there is great entertainment right down the street at Universal’s four parks (the two that exist today, the one it is about to build across the street from the convention center, and SeaWorld, which it will buy at fire sale prices in a few years (I jest, at least I hope so)). 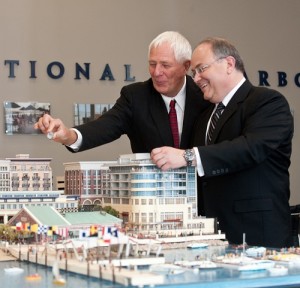 Disney was on the right path when it started its Location Based Entertainment (LBE) initiative. It just wasn’t thinking grand enough. Sure a Disney resort hotel and DisneyQuest sized entertainment complex outside of Washington D.C. would be an attraction, but it wouldn’t scratch the same entertainment itch that makes people want to take a three-day weekend vacation to a theme park. The numbers don’t work out.

The idea for these LBE’s came out of Disney Imagineering’s hotel development division. It wasn’t coming out of the creative core of Imagineering (which had other ideas, like a floating theme park). The new regime at Imagineering needs to figure out how to do both, build a LBE style destination that also provides a two-day theme park experience.

Disney knew it would eventually have capacity issues at Walt Disney World that’s why it proposed Disney’s America. A themepark located outside of Washington D.C. that would have been something between Knott’s Berry Farms and historic colonial Williamsburg in terms of theming. The park was defeated by land owners who didn’t want the extra traffic on their roads and eventually morphed into a second gate at Disneyland in California. Aulani, the only resort to survive the LBE experiment

This new domestic park I propose will serve two purposes. It will help Disney to continue to grow its theme park capacity without overbuilding in Florida. It will also serve as an advertisement / introduction to the Disney product for people who aren’t ready to commit the kind of funds it will soon require to visit the luxury resort that Walt Disney World is in process of becoming.

The idea of providing that taste of Disney theme parks elsewhere in the US should not have been discarded just because the nation entered a great recession. Walt Disney World is already having capacity issues (hotel rooms are averaging around 90% occupancy and the Magic Kingdom is consistently reaching capacity around the holidays). In order to keep from reaching capacity more frequently, Disney would have to seriously raise prices to the point where the ‘value’ of a vacation just isn’t there any more for more and more people. That will shrink the size of their potential audience to the point where they’re trying to convince the same 5 or 10% of American to visit over and over again. Building a new theme park somewhere in the US will act as an overflow valve and provide growth in audience beyond what Walt Disney World is designed to hold.

So, let the battle begin. If you live in a major population area, why do you think Disney should build its new theme park near you? Where would you place an entire new Disney theme park and resort complex?