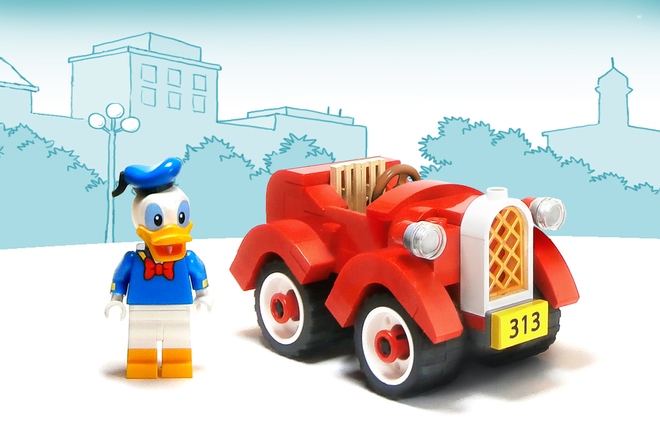 As you may have heard there is now a Disney edition of LEGO minifigures, including Donald Duck. Of course that means soon we’ll have a whole set of Disney themed LEGO sets as well. Some fans don’t want to wait and have made their own models like this ultra cute Donald Duck car “The 313.”

Constructed by Johan Alex out of Gothenborg, Sweden (where they call Donald Kalle Anka). He tells us the car first appeared in the animated short “Don Donald” in 1937. It’s based on the American Bantam car, which has been popular among cartoonists and animators. Donald Duck was ‘born’ on March 13th. Hence the license plate number.

Alex grew up reading a lot of Donald Duck comics and owns a huge collection, including almost every comic from the 80s, his favorite era.

“When I heard about the release of the Disney Lego minifigs I got inspired to build his car (since I’m a Lego fan as well) and started working on it a month before,” said Alex. “It was really fun to design and a challenge to try and give it that iconic look that the car has in such a small scale. Some detalis I had to leave though, like the backtrunk(?) where his nephews sits.”

Keep in mind it takes 10,000 votes to make a LEGO model a reality. This model is at 600 likes right now, so it can use your help! Go vote on LEGO’s site right now.