With some new concept art that’s been added to the construction walls at Disney’s Hollywood Studios, we have a new look at where Disney plans to build its first Star Wars themed land at Walt Disney World. Those rock spires in the upper left match the rock spires in Star Wars concept art we see in other areas. Look at the far right of the image below:

The big surprise is that Star Wars will be built adjacent to the planned Toy Story Land. It was originally believed that some of the expansion would go outside the existing boundaries of the park allowing some expansion room between the two. But now, based on that concept art, it looks like all 14-acres will be inside the existing walls of the park.

That’s a pretty significant change and it’s believed that they made it to increase the speed at which the projects can be completed and to reduce the cost.

First, what we know. The Star Wars themed land will be comprised of two main attractions: 1) an encounter with the First Order that involves a motion simulator similar to Spider-man at Islands of Adventure, and 2) a ride where you get to pilot the Millennium Falcon. There will also be some shops, a cantina bar, and a restaurant.

Although we haven’t yet seen any official blueprints for Disney’s Hollywood Studios, thanks to plans for Disneyland, we have a good idea of what the land will look like at DHS. So using that, I’ve made a stab at how the expansion will now fit. 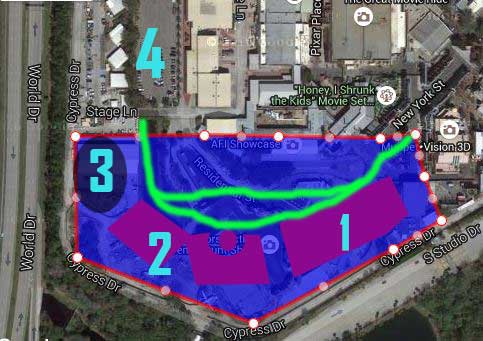 Area #1 is the big First Order attraction show building, #2 is the two show buildings that will compromise the queue and Millennium Falcon attraction, and #3 is possible expansion for a third attraction. The blue area is 14-acres which will range from near the Toy Story Land area (#4) all the way around to behind the Muppet Vision 3D show building without requiring Disney to move the existing main entrance road.

I understand why Disney is going this route. It means that less site work has to be done to get the park ready and therefore they’ll also be able to get Star Wars Land built faster.

What I don’t liek about this option? It cuts off potential expansion of DHS on that side of he park. Leaving the plot of land open where LMA and Catastrophe canyon were would have left room for a future expansion of Pixar attractions (rumored to be Monsters Inc and version of Cars Land). There is potential instead to put that “Pixar third phase” over where Star Wars Launch Bay is right now (which won’t be needed once Star Wars land opens). 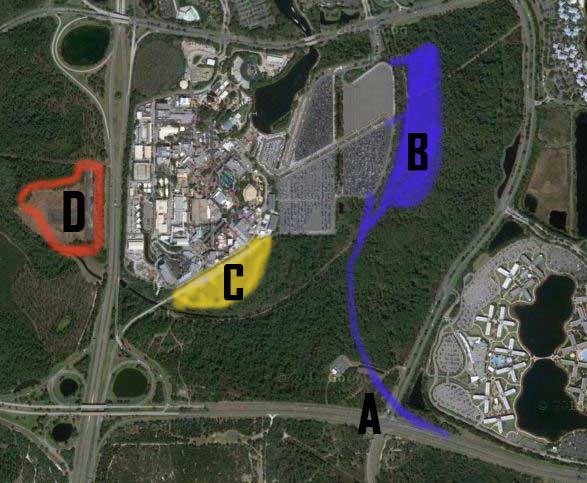 With this configuration they don’t have to do the huge work of rerouting the main entrance to Osceola Parkway and Victory Way, closing off the Buena Vista entrance to cars in the process. Area A on the map below would be the flyover leading from Osceola Parkway into the newly expanded parking lot (Area B). Area C was the planned for expansion area we had seen in filings with the water district for environmental studies. Finally area D is the future home of the new Fireworks Launch area along with some additional drainage from DHS.

If no main entrance road changes are made now, that means that they’ll have other issues with expansion later on. Of course, Disney could always re-route the main entrance at a later date if they want. They’ll definitely need the new parking lots by the time Toy Story Land and Star Wars Land are both open.

Speaking of timelines, we don’t have any. It was thought that they were aiming for a 2019 opening for Toy Story Land and 2020 opening for Star Wars Land. Those dates have probably been moved up a bit.